The Kansas Reflector welcomes opinion pieces from writers who share our goal of widening the conversation about how public policies affect the day-to-day lives of people throughout our state. Lisa Ash Sublett is the president and co-founder of Bleeding Kansas Advocates, a patient advocacy group.

At the beginning of the Kansas legislative session of 2019, a Republican member of the Kansas House shared with me his experience while canvassing in his district.

Rep. Tom Cox, R-Shawnee, said he could not get over how many people were asking him, “What is the hold up with Kansas and medical cannabis?” It happened so often that he polled his mostly red district on the topic. More than 82% of the people who responded said they somewhat or strongly supported medical cannabis in Kansas.

A Republican senator told me she also had polled her red district, and enough of her constituents supported medical cannabis that it caught her attention. Considering the economic development potential, she said, she likely would support a well-crafted bill.

Yet these legislators haven’t had a chance to vote on medical cannabis.

What is the holdup? The answer is complex.

The Kansas Legislature’s rules do not allow a majority of committee members to overrule their chair to allow a bill to be heard or to vote on a bill. Every year at the beginning of session, lawmakers propose rule changes. Only a rule change would allow the majority of a committee to have this power.

These obstacles have deeply impacted our ability to get hearings for medical cannabis bills and to get them to the floor for votes. In the 10 years medical cannabis advocates have put forth bills, only two have been allowed hearings, and neither of those made it out of committee. The Kansas Safe Access Act, a medical cannabis bill written by our organization, was brought as an amendment by Rep. Cindy Holscher, D-Olathe, on the House floor during the 2018 session. It failed, with 54 in favor and 69 against.

People often ask why we cannot just “take the vote on medical cannabis to the people.” It would be great if we could gather signatures and do just that. However, Kansans have no constitutional right to signature-driven ballot initiatives. State ballot initiatives in Kansas require a 2/3 majority vote of the Legislature and primarily are reserved for constitutional amendments. Lawmakers have been hesitant to qualify the issue of medical cannabis as worthy of a constitutional amendment.

What makes a good bill?

Simply asking candidates to support medical cannabis without considering the nuances of different bills will do more harm than good to patients, and to our state, if we are married to a bad bill that will take years to correct. This year, the chairs of the Senate and House Federal and State Affairs committees introduced a highly restrictive bill, the Kansas Medical Marijuana Regulation Act, with overly complex and expensive oversight. It was based on the Ohio model, which has faced multiple lawsuits, and advocates in Ohio say it has been detrimental to patient rights and access. The bill has expensive overhead costs due to multi-agency administration.

Bleeding Kansas Advocates supported the Kansas Equal Access Act, which would have given oversight to the Kansas Department of Health and Environment, and left treatment choices to patients and their medical providers rather than creating a list of approved ailments, which inevitably leaves many in need of access off of such a list. It would have protected more patient rights along with Kansas businesses.

Neither bill got a hearing in the 2020 session. Both will have to be reintroduced in the 2021 session. 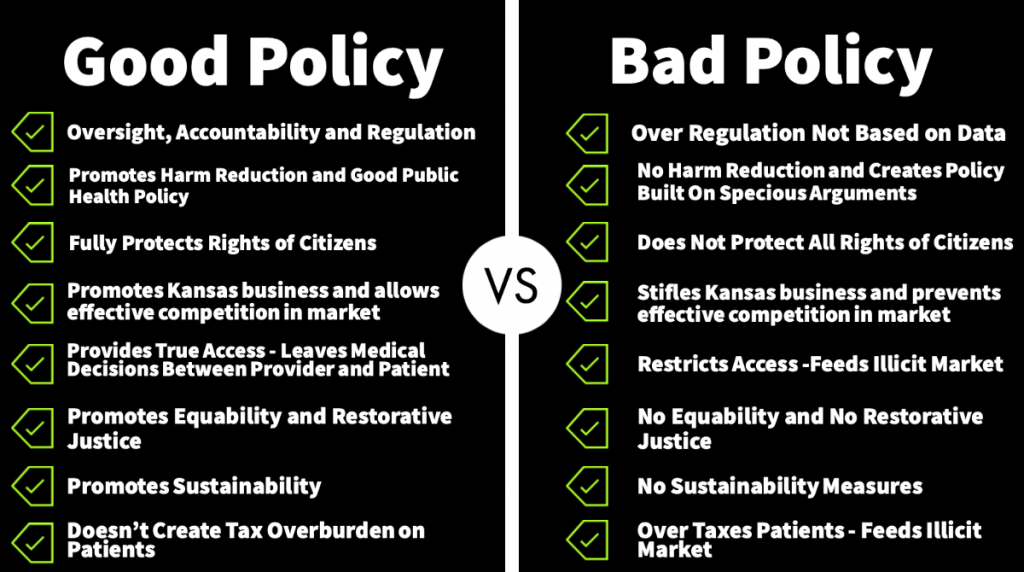 Kansans must have elected leaders who will represent the will of voters on medical cannabis over and above their personal views on the topic, their hopes of personal financial gain in the industry, or the influence of large donors.

A primary election voter guide based on candidate survey responses on the topic of medical cannabis is available at bksadvocates.org. If your candidates did not answer the survey or answered in a way you do not agree with, then it is imperative to share that information with other voters who support medical cannabis in your district. Another voter guide will be released for the general election.

Many Kansans support medical cannabis. The Legislature won’t give us a vote.