Native American activists say violence against indigenous people is being overlooked by federal authorities who are more interested in a politically charged crackdown on civil rights protests.

The U.S. Justice Department in July announced the launch of Operation Legend, an anti-violence campaign, in Kansas City, Missouri, then expanded the federal policing efforts to other major Midwest metro areas where demonstrations against police brutality have attracted news coverage.

Meanwhile, the activists say, little attention is given to missing and murdered Native Americans.

The Urban Indian Health Institute found that 5,712 Missing and Murdered Indigenous Women reports were filed in 2016, but only 116 were logged in the Justice Department’s database.

Nationally and in Kansas, activist groups work in isolation to address the violence.

Carolyn Deford, a spokeswoman for Missing and Murdered Native Americans, said federal authorities haven’t made contact with the organization, which promotes social healing and cooperation within Native American communities.

“We are motivated by our lived experiences,” Deford said. “We know the challenges of searching for our vanished loved ones and grieving their absence. We have begged and fought for justice and been ignored. We have survived the American genocide, but the historical policies and effects have magnified the trauma and violence inflicted on Native people. Those policies have fueled the crisis of missing and murdered indigenous people in the U.S. and across the borders.”

In Kansas, documented cases of unsolved violence against Native Americans trend higher in the Wichita area. They include Shawnee Buffalohead, a 17-year-old Wichita girl who has been missing since July 18. She is one of 15 active cases currently monitored by Missing and Murdered Native Americans across the United States.

The Indigenous People’s Initiative has worked since its formation in October to promote safety and stability of Native Americans in the Wichita area.

“We are the least represented race there is, but we are still here and we still count,” said Nicole Castellanos Jay Nesahkluah, who is involved with the Indigenous People’s Initiative. “We want to be seen and heard just like everyone else.”

Nesahkluah said the initiative plans to organize women’s marches, candlelight vigils and awareness campaigns about missing and murdered Native Americans after the pandemic is over.

Rep. Ponka-We Victors, D-Wichita, introduced legislation in February that would give the Kansas Attorney General authority to coordinate training between state and tribal law enforcement agencies to address missing and murdered Native Americans. The bill passed the House on a 125-0 vote, then died from lack of action in the Senate.

This story has been corrected and updated to reference the full name of Nicole Castellanos Jay Nesahkluah and clarify that the Indigenous People’s Initiative plans to hold vigils and marches when the pandemic is over. 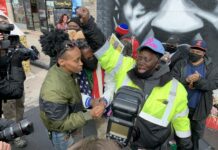