Caroline Kennedy played soccer for Blue Valley West until her senior year, when she had to sit out because of a concussion. (Submitted by Caroline Kennedy to Kansas Reflector)

Caroline Kennedy understands the pain of not being able to play sports her final season of high school.

“I played varsity soccer,” says Kennedy, who grew up in Overland Park and graduated from Blue Valley West in 2016. “I had to quit my senior year because of a concussion, but I played freshman, sophomore and junior year.”

Athletes currently enrolled at her alma mater and their families have been among the most vocal in arguing that schools should reopen and fall sports should go on despite the threat of COVID-19. Meanwhile the entire Blue Valley West football team was quarantined, and the district decided high school would begin remotely and postponed sports for at least two weeks.

Kennedy, now 22 and a recent graduate of the University of North Carolina at Chapel Hill — and living back at home waiting out the pandemic while she figures out what’s next — has some older-and-wiser advice for current Jaguars and high schoolers everywhere who fear their lives are ruined.

She gets the desire to play and the stakes involved for some athletes. Her chances of going to college didn’t rest on final-season game tape, but her sisters went to college on sports scholarships.

“They depended on that to get funding to college, so I definitely have empathy for students who are in that same boat,” Kennedy says. “I’m not saying it doesn’t suck because it does suck, but when it’s literally a matter of life and death and people are dying from this disease, you can’t really put anything else above that.”

Kennedy began to understand putting others’ needs above her own when she was an 8th grader at Lakewood Middle School. That’s when she heard a talk by Holocaust survivor Sonia Warshawski, whose powerful story is documented in the film “Big Sonia” (the subject of yesterday’s column).

In the film, Kennedy is among the students who meet in a small group with Warshawski after an assembly.

“Most people in Johnson County going to school in the Blue Valley district, we are living very privileged lives. Sonia sort of taught me the life lesson that, if there’s anything I can do for greater good, to try to make people’s lives a little easier,” she says. “I started thinking beyond my sort of bubble, my family and friends.”

She started reading the news.

“All of a sudden that wasn’t something happening in a different country,” Kennedy says. “It was right down the street, exactly what Sonia was talking about and warning us against.”

By her junior year at Blue Valley West, Kennedy had decided to form a club in honor of Warshawski. They called it Empower: Educate & Inspire. Each member picked a global issue to research and present to the group.

“We discussed current events and taught each other about things we didn’t know about,” she says.

The idea took off. It spread to other Blue Valley schools and eventually they registered it as a 501(c)(3), and other students started chapters in their own states. There were even a couple of chapters in China, Kennedy says.

It was hard to maintain connections after everyone graduated and went their separate ways, so they dissolved the nonprofit. But their work lives on.

In college, Kennedy and her Empower team created a workbook based on everything they’d learned.

“We gave hundreds of them away to various high schools and middle schools who requested them,” she says.

It could probably help all of us. 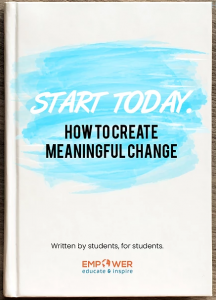 “It asks a lot of questions to help you think about where you are right now, what resources are available to you right now,” she says, “because it’s not designed only for Blue Valley schools who have those same resources. It’s also for students in different states, in underprivileged or underserved neighborhoods.”

Here’s where Kennedy sounds like an especially wise elder.

“In this moment, everybody feels like they’re underprivileged from what they normally are,” she notes.

“At least for me, if I’m watching Netflix or just reading books, I’m not making the world any better. That inspires me to work on projects that are more community service oriented, to give my life more meaning.”