TOPEKA — Gov. Laura Kelly on Monday expressed alarm at rapidly worsening COVID-19 numbers in Kansas and blamed Republican legislative leaders for standing in the way of a statewide mask mandate.

The Kansas Department of Health and Environment has confirmed 66 deaths related to COVID-19 in the past week, bringing the pandemic’s statewide total to 600. At least 53,959 Kansans have been infected with the disease, which can cause long-term damage in hearts, lungs and brains.

The governor said during her weekly briefing at the Capitol that Kansas had passed a make or break point for mitigating the spread of the virus, and failed.

“I am concerned about our ability to slow the spread of the virus,” Kelly said. “I’m concerned about the rising number of COVID-19 cases and deaths we’ve seen over the past several weeks. I’m concerned that because of certain legislative leaders, Kansas has been left with a patchwork of local mask mandates, instead of a statewide policy, like 34 other states.”

The Legislature blunted the governor’s ability to impose statewide restrictions before adjourning in May. The governor vetoed their action and called lawmakers back for a special session, where she negotiated a compromise with Republican leadership. The resulting bill gives counties the authority to develop their own guidelines independent of the governor, and they have imposed varying restrictions across the state.

“Kansas is a diverse state,” said Senate President Susan Wagle, R-Wichita, “and the elected officials closest to the people should manage the response to the COVID crisis in accordance to their outbreak and their community needs. Her continuing efforts to blame the Legislature and spread fear throughout the state is not what Kansans need in a leader.”

The virus has been detected in every county in Kansas, but seven of the sparsely populated counties count the numbers in single digits. At the other extreme, Johnson County has recorded more than 10,400 cases, Wyandotte County more than 6,800, and Sedgwick County more than 8,400.

As the end of summer approaches and gives way to flu season, the virus already has intensified in Kansas to inflict greater suffering than ever before.

KDHE reviews death certificates before affirming COVID-19 as the cause of death. The numbers added to the statewide total, which is updated three times per week, include virus victims who died weeks ago. Nearly 200 deaths have been added to the total in the past month.

It now appears August was the deadliest month of the pandemic in Kansas, and it is too soon to know if September will be worse.

Kelly said some of the spread of the virus can be attributed to the reopening of schools, businesses and sports.

“We knew this was coming,” she said. “We knew we could prepare for it, but because we failed to implement a coherent coordinated mask policy, because we’ve taken an ineffective patchwork approach to our COVID-19 response, cases and deaths continue to rise.”

The governor said she wasn’t interested in calling back the Legislature for another special session before the start of the regular session in January. Instead, she urged Kansans to maintain social distancing, avoid large gatherings, and wear a mask in public places whether it is mandated by local officials or not.

“First of all, it’s a relatively easy thing to do,” Kelly said. “It’s a nuisance. I don’t like them either, but it’s not a hard thing to do. And it is the one thing we know that really does mitigate the spread.” 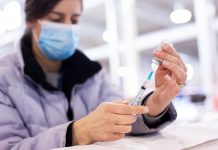 Medical experts dispute claims by Kansas Board of Education member