The Kansas Reflector welcomes opinion pieces from writers who share our goal of widening the conversation about how public policies affect the day-to-day lives of people throughout our state. Jazmine Rogers is a youth leader with the Kansas juvenile justice group Progeny.

Growing up in Kansas, I’ve witnessed the heartbreaking relentlessness of our state’s youth legal system. A new report from the Kansas Appleseed network sheds light on what we already knew — that Black female students are six times more likely to be disciplined than their peers.

This is not surprising if you know the system’s history of over-policing that is rooted in unfairness toward Kansans of color — especially Black people. When I was in high school in Wichita, it was easy to tell that school administrators were more fixated on over-policing than on the health of students. For example, two police officers were monitoring students at all times, but the nurse was only present twice a week.

Schools need to reform their blatantly unfair truancy policy that disproportionately targets Black female students. Why are kids being suspended for truancy at all? If you suspend someone for missing two days of school, missing more time from class doesn’t help them become a better student.

Sadly, this report reveals that Kansas schools would rather turn their backs on their Black student population than support them. The disregard teaches Black girls at an early age that we have to fend for ourselves as we grow up through this system.

We need to demand that Kansas education officials start assuming their responsibility to guide us toward college and adulthood. Why not ask kids what is preventing them from attending school instead of suspending or expelling them? Why set children further back? School systems need to be held accountable for the horrible discriminatory practices that are pushing Black and brown kids into the Kansas legal system.

When Black and brown girls are funneled into youth prison systems, they face harrowing conditions inside youth prisons.

This is not acceptable.

Youth prisons are relics of the past and represent this nation’s lasting legacy of slavery and racial injustice. There’s no excuse to allow them to continue operating. Research shows that incarcerating children only makes crime worse. With persistent outbreaks of COVID-19 inside youth prisons across the country, Kansas must move away from the prison model and toward a community-based model to protect the health and safety of Black and brown children before the virus impacts the state’s youth facilities.

Fortunately, because of two outstanding restorative justice leaders who came to my high school, my friends and I did not have to endure Kansas’ faulty youth legal system. They did the hard work to organize our teachers, drive anger management presentations and organize students around true juvenile justice.

Everyone knows that students require rules, but with everything moderation is key. No student should get expelled for bringing a nail clipper to school. School leaders need to be more gentle and empathetic around the unintentional racist consequences these archaic rules cause. Now, kids are quarantining and experiencing more isolation than usual. Most kids are under extreme amounts of stress and need more care than ever before.

Organizations like The Youth First initiative are committed to the work and reforms that young people require. Kansas youth leaders are facilitating youth visioning sessions, asking their peers to share their ideas, like how they would redirect money from school resource officers and youth prisons to their communities.

We should all encourage our friends, family and peers in school to hold Kansas schools and youth prison leaders accountable for addressing the extreme disparities shown in the Kansas Appleseed report.

I wish there were an easier way to get people to care more about public education, especially for Black girls who are often forgotten and discarded by the systemic racism that permeates our country. But complaining doesn’t help anything, and anger only breeds more anger.

What we must do is come together and compel our Kansas lawmakers, elected officials and school representatives to see us, acknowledge our suffering, and force them to change course.

Yes, Kansas, there’s a war on beef — but not the one Roger Marshall’s talking about 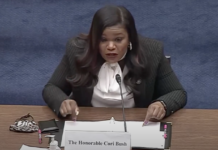 After a few failed attempts and many hours of waiting, the House passes HB 2313 by a 108-3 vote #ksleg #ksed

To the House, it goes #ksleg