TOPEKA — There was no surprise Republican U.S. Senate candidate Roger Marshall was asked during a campaign stop at a southeast Kansas senior center about potential of the Social Security system running out of money.

“Is there anything you plan to make sure it stays there. I’m worried,” a man said during the Sept. 4 event for about a dozen people at the Senior Citizens Activities Center in Coffeyville.

Marshall, who is campaigning for an open U.S. Senate seat against Democrat Barbara Bollier, said Social Security was under scrutiny because of the long-term gap between Social Security’s projected income and promised benefits. Due to political sensitivity of altering the system, he told the elderly audience, it would likely require a second-term president to push through change.

He promised not to advocate reform that adjusted benefits to people receiving Social Security checks or individuals within a decade of drawing on Social Security.

“But people that are more than 10 years away, we probably need to start doing something different,” Marshall said in Coffeyville. “We need to move some dials back. Maybe we’re going to delay when they’re going to get to start it, but something has to happen. We’re going in the wrong direction.”

Bollier’s campaign said the surprise was Marshall contemplated ideas that would undercut Kansans who had been obligated to pay Social Security taxes for many years.

“It’s alarming that Roger Marshall plans to cut Social Security for Americans who have paid into the program for decades. Barbara does not support cutting Social Security,” said Alexandra De Luca, a campaign spokeswoman for Bollier.

Bollier is a Johnson County Democrat who serves in the Kansas Senate, while Marshall is the 1st District congressman from Great Bend. They are competing to replace retiring U.S. Sen. Pat Roberts in a general election campaign that has consumed more than $29 million in advertising. Recent polling in the campaign ending Nov. 3 suggested Marshall and Bollier were in a statistical tie.

De Luca said comments by Marshall about Social Security were distressing given a report in The Kansas City Star that Marshall chose not to cover payroll taxes on wages and salaries of people working on his Senate campaign. These taxes help fund the federal government’s Social Security and Medicare programs.

“He knows that if the next generation wants to see a dime of it, adjustments have to be made,” Pahls said. “He’s coming to the table seeking solutions, not cheap talking points meant to scare seniors.”

In the third quarter of 2020, Bollier reported $13.5 million in campaign contributions to Marshall’s quarterly total of $2.9 million in the months of July, August and September.

The latest campaign finance reports show Bollier generated $1.2 million in itemized donations from Kansans during those three months, while Marshall collected $892,000 from identified Kansas donors. Marshall had a higher percentage of his total come from Kansans. He also accepted more cash from political action committees than Bollier during the third quarter — $698,000 for Marshall and $156,000 for Bollier.

Pahls also pointed to a report in the Shawnee Mission Post that quoted Bollier recommending that U.S. senators involved in confirmation hearings of Amy Coney Barrett, the nominee of President Donald Trump to serve on the U.S. Supreme Court, to ask about Barrett’s view of religion’s role in evaluating cases.

In the interview, Bollier said it was appropriate for Barrett to be asked how her faith intersected with the law and whether the nominee would inject her views on faith into cases as a member of the Supreme Court. Bollier said the bottom line was whether Barrett followed the Constitution.

“Barbara is a woman of deep faith who respects every person’s right to freely practice their own religion,” said De Luca, the Bollier spokeswoman. “She also understands the United States Supreme Court is one of the most important institutions in our country and should not be politicized by either political party.” 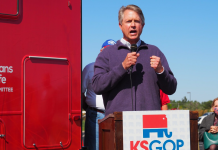