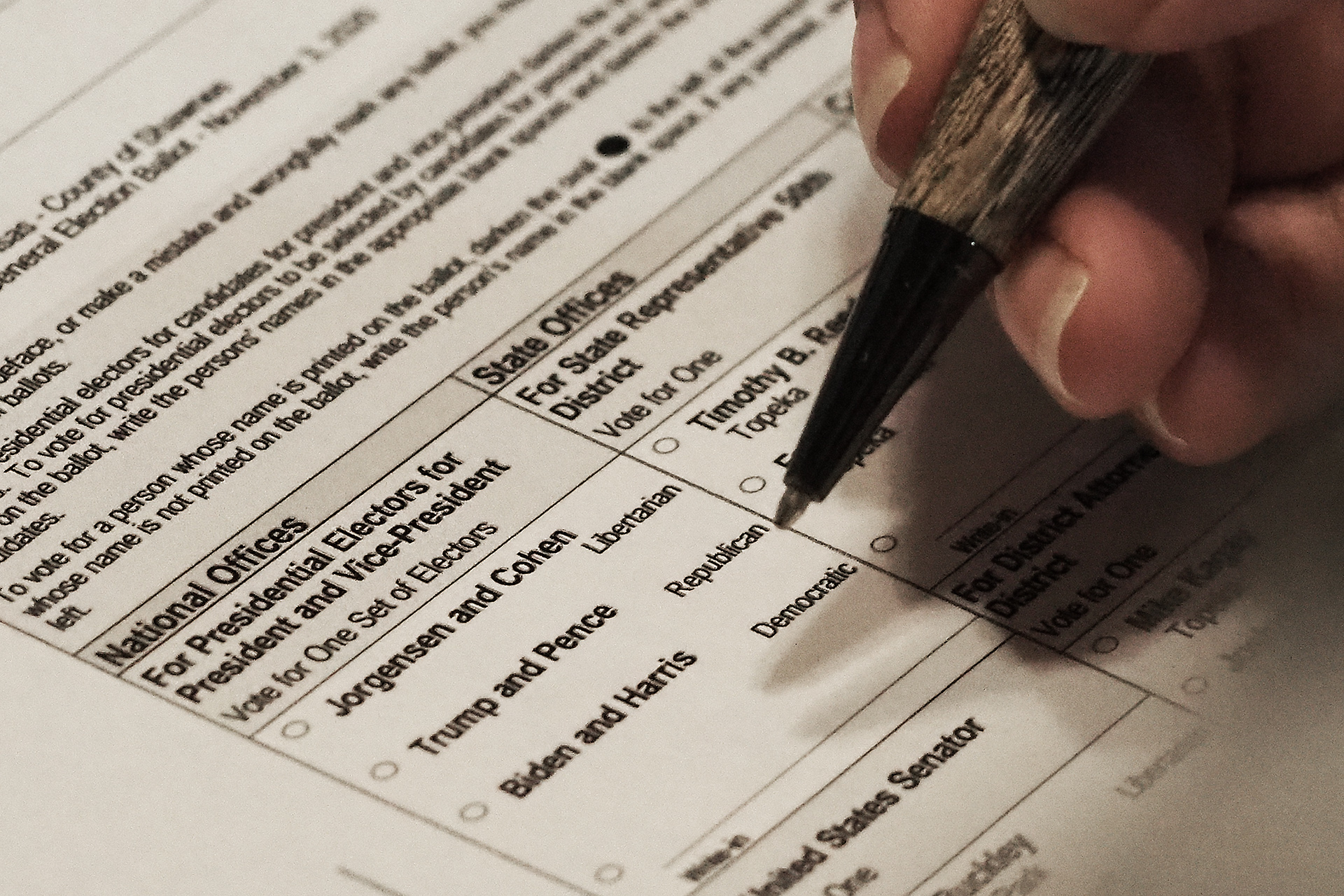 Lately, it’s been a conversation starter.

The co-president of the League of Women Voters of Kansas recently wore her voting-themed facemask to a retail store in Emporia, where she was approached by another woman.

The 2020 general election is unlike any other — distinguished by the challenges of a deadly pandemic, disinformation about fraud, a polarizing president, changes to U.S. Postal Service operations, and a record number of early voters.

County election offices across Kansas begin early in-person voting this week, if they haven’t already, after sending nearly a half-million mail ballots last week to registered voters who requested them.

Election officials and political parties are encouraging voters to cast their ballots sooner than later this year to account for concerns about slow mail delivery or long lines induced by social distancing on Election Day.

“I think we’ve just been so accustomed to our routine of voting in the past, and it’s probably been very relaxing, plenty of poll workers and everything to make things run so much more efficiently and smoothly,” Briggs said. “That may be just a bit slower this time and not quite as we expected, but I know the county clerks that I’ve talked to are just working hard to make sure everything runs as it should.”

Harvey County Clerk Rick Piepho said it is difficult to know whether to expect more in-person early voting this year because his office has received so many requests for ballots by mail.

As of Friday, election offices statewide had mailed 472,281 advance ballots. The deadline to to request a ballot by mail is Oct. 27. They must be postmarked by Election Day, Nov. 3, and received by Nov. 6, to count.

Counties may open locations for early in-person voting up to three weeks before Election Day, but most will begin doing so on Monday or Tuesday. Voters should check with local election offices for details on when and where they can vote.

Democratic and Republican parties in Kansas have sent applications for mail ballots to registered voters as part of their strategy for ensuring turnout in the general election.

Party officials wouldn’t elaborate on their strategy, but Democrats have sent applications to at least some independent voters.

So far, Democrats outnumber Republicans in mail ballot requests despite the advantage Republicans have in registered voters. Democrats have requested 220,000 ballots, Republicans 178,000 and independents 73,000.

“Because this is such an important election that is also happening in the middle of a pandemic, we are ensuring Kansans know about all of their voting options so they may vote safely and in the manner that works best for their schedule,” said Vicki Hiatt, chairwoman of the Kansas Democratic Party.

Rather than emphasize voting by mail, Republicans have encouraged voters to show up at election offices before Nov. 3.

“Kansas has robust early in-person voting, and it is a great way to ensure your vote is cast safely and securely and definitely counted,” said C.J. Grover, spokesman for the Kansas Republican Party. “We’re encouraging all Kansas Republicans to vote early in person, and we’re providing all the necessary information to help get as many people to the polls between now and Nov. 3.”

Voters who asked for a mail ballot can take their ballots to election offices, polling locations or a secure drop box if they don’t want to rely on the postal service.

The SOS office purchased the drop boxes from American Security Cabinets, a Minnesota-based company, and paid $2,029 per drop box, including shipping.

“For the primary election,” Koupal said, “one takeaway was that voters returned advance by-mail ballots through means other than the USPS more than before.”

The SOS office provided best practice guidelines to counties for installation of the drop boxes.

DeJoy ushered sweeping changes to overtime and delivery polices after taking the job in June and planned to remove hundreds of mail-sorting machines at facilities nationwide. He suspended those plans while under scrutiny in August.

Kansas Republican U.S. Sen. Jerry Moran said he met personally with the postmaster general to “make the case that we want everybody to vote that is legally entitled to vote.”

“We need to make sure the Postal Service is prepared for those who vote by mail,” Moran said.

Trump also ignited skepticism about the integrity of the election by repeating false claims about voter fraud.

Piepho, the Harvey County clerk, advised voters to tune out any rumors they hear about destroying ballots and “all the stuff” that happens in other states. Kansas officials, he said, have things under control.

“I had a guy ask me yesterday, ‘I hear at the coffee shop that people say advance ballots are only counted if they’re needed,’ ” Piepho said. “No, that’s not true. What do you mean by needed? I assured him we count every ballot in our possession if we possibly can count it, regardless of how tight or what the political climate is, if everybody is interested or nobody is interested. The processes are the same. We count them all.”

ACLU says Ellis County clerk and Secretary of State failed to protect election workers by requiring facemasks. The ACLU filed a complaint Thursday with the labor dept on behalf of an election worker with a heart transplant #ksleg https://t.co/wRzbpUX1pY

Kelly, Kansas legislators earmark up to $95 million for COVID-19 testing. | via @TimVCarpenter https://t.co/JOu85aVe8X

30 states use this technology against voter fraud — so should...

Kansans have already requested twice as many mail-in ballots as past...