Former Topeka resident Kevin Young, a poet and author, will become director of the director of the National Museum of African American History and Culture in Washington, D.C. (Melanie Dunea/Smithsonian Institution)

Kevin Young has a lot of things to think about besides Kansas these days, but it’s still on his mind.

Young is a celebrated poet, nonfiction writer and editor who lived in Topeka from fifth grade though his graduation from Topeka West High School in 1988, then went on to become one of the country’s brightest minds.

Since 2016, he has directed the New York Public Library’s Schomburg Center for Research in Black Culture. In January, he takes over as director of the Smithsonian’s National Museum of African American History and Culture.

Kansans are proud of their state’s contributions to American history, first and foremost as a free state. But there’s another role that’s been on Young’s mind.

“Telling that history of freedom and enslavement has to go through Kansas,” he says, “but I also would say so does the similar story of Black literature. Some of what I’m writing now is about that, and thinking about Black Kansas and how it influenced people like Langston Hughes.”

Hughes is another one of those poets Kansas can brag about, along with Gwendolyn Brooks, even if their greatness is — let’s be honest with ourselves — associated with other places (Hughes with Harlem, Brooks with Chicago). Still, the Kansas connection is undeniable.

“Even someone like Claude McKay spent time in Kansas — he went to K-State in the nineteen-teens,” Young says of another pillar of the Harlem Renaissance.

McKay grew up in Jamaica but studied agriculture at Kansas State University for a couple of years, starting in 1912.

“I can only imagine coming from Jamaica to Manhattan, Kansas, was probably a big transition for him,” Young says. “So I’m really interested in how Kansas plays into both social history but also literary history.”

Young has made his own contributions to that history with his many books, including 2017’s “Bunk: The Rise of Hoaxes, Humbug, Plagiarists, Phonies, Post-Facts & Fake News,” which seems much too of-the-moment.

“When I started it, I was like, ‘Who would care about fakery in American life?’ And now it seems somewhat prescient,” he says. “At the time I was writing it, I would say things like ‘It’s a really dangerous time, it seems to be getting way worse,’ and it’s gotten even worse since the book came out. Now I think there’s a danger of people accusing things that are true of being hoaxes. That’s become hard to see.”

The antidote is in a new anthology he’s edited. “African American Poetry: 250 Years of Struggle & Song” is an enormous (1,170 pages) contribution that feels like the truest telling of the American story right now. 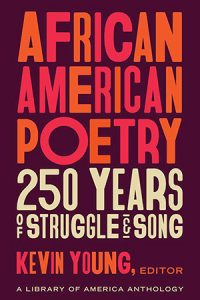 The first book published by any Black American is older than the country itself: 1773’s “Poems on Various Subjects, Religious and Moral,” by Phillis Wheatley, who had been brought by slavers to America around the age of 7. Young’s anthology starts there and goes all the way up through HBO’s “Def Poetry Jam,” to Pulitzer Prize winners Natasha Trethewey (2007), Tracy K. Smith (2012), Gregory Pardlo (2015), Tyehimba Jess (2017), and Jericho Brown (2020).

Along the way, generations of poets talk to and about each other, their astoundingly beautiful language and rhythms providing us with a clear-eyed, honest and unflinching history of the country, entirely from a Black point of view.

It serves as a literal recording of history that comes at a perfect time, when more white Americans are finally ready to listen to Black people.

“You saw this summer a real desire to understand Black history, Black culture, how we can best understand each other,” Young notes. (That’s one reason the Schomburg Center released the 160-book Black Liberation Reading List.)

To quote from any poem in the new anthology would be an injustice to all the others, but because injustice is part of the larger story here, I’ll go ahead and do it.

The lone entry from Gary Jackson, who like Young and so many others had to leave to make their mark, is the one titled “Kansas.” It concludes with the lines:

Shorn grass & damp dirt:
they’ll put me in the middle.
I kick the ground like tires,
feeling dumb without flowers /
tokens / grief / anything
in my hands. You’ll bring me
back home, won’t you? Stamp
it down, as if the flat earth
could answer sometimes this,
too, is love. You left.

And this, from a Claude McKay poem called “America,” written in 1921, a few years after his short time in Manhattan:

Although she feeds me bread of bitterness,
And sinks into my throat her tiger’s tooth,
Stealing my breath of life, I will confess
I love this cultured hell that tests my youth.

“I was finishing the introduction during Juneteenth, and that was in the midst of the aftermath of George Floyd’s murder and the uprisings and the unrest, and I was really struck by how the poets had been talking about this,” he says.

Poets are prophets. Or, as Young puts it: “Poetry is a means to see through things to the true things.”

LGBTQ community, people of color in the crosshairs of banned… by Ariana Figueroa April 18, 2022
‘We have the watch’: Stories from inside NORAD on 9/11 by Emma Athena September 11, 2021
Kansas welcomed a pawn shop for the rich in exchange for a… by Sherman Smith April 24, 2022