A detail of the cover image from Plume’s 1988 cover of Toni Morrison’s ‘Beloved,’ which won that year’s Pulitzer Prize for Fiction.

The Kansas Reflector welcomes opinion pieces from writers who share our goal of widening the conversation about how public policies affect the day-to-day lives of people throughout our state. Kristin Van Tassel teaches writing and American literature at Bethany College in Lindsborg.

The nation’s widespread and continuing social justice protests sparked a substantive recommended booklist — contemporary books written to help readers see how systems perpetuate historical racism and how white people continue to be complicit, intentionally or not.

There’s a longer, deeper body of reading we should turn to as well. The fiction and autobiographical narratives of America’s literature have and continue to enable white Americans to see race, including our own, my own, within systems.

Stories enlarge a reader’s experience in the world — readers can enter, imagine and feel the particular injustice of systemic racism. To read our nation’s literature is to bear witness.

Toni Morrison’s novel “Beloved,” perhaps the best known of the Nobel winner’s lifetime work, is a ghost story. It tells the story of a Black woman whose enslaved past haunts her in two forms — first as the spirit of her dead baby daughter maintains a steady reign of torment in the house and, then, as an embodied woman, the age the baby would be had she lived, who arrives to take full possession of the household.

Set in the context of a larger body of American literature, “Beloved” should be read as the ghost story of this nation. The one keeps us up at night, that never lets us rest. 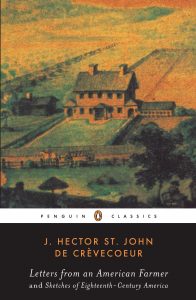 To be sure, we’ve been haunted by systemic injustice since the beginning. Hector St. John de Crèvecoeur’s “Letters from an American Farmer,” published in 1782, is a series of fictional letters describing the life of a farmer, James, who lays out the American Dream in all its glory: The peasants of Europe leave their toils for a new land; they work, save, buy their own land, intermarry and become something altogether new.

Later, James takes a trip to Charleston and is sickened by what he sees: enormous wealth and opulence supported by chattel slavery. En route to an enslaver’s plantation, James encounters a Black man in a cage hanging from a tree; his eyes have been eaten out by birds.

James does not offer a resolution to this horrific scene. The letter ends there; the next letter moves on to an inventory of animals in the New World (snakes and hummingbirds). However, contemporary readers of Crèvecoeur — say, for example, my American literature survey students in rural Kansas — see what James the narrator cannot: the profound inadequacy of his response.

Literature disarms us, first, by giving us access to the internal life of another. At the same time, we remain outside this character we have come to know through reading. Being both inside and outside of the character, we can both feel and assess, together. Hence, when white readers encounter James the farmer celebrating his wonderful American Dream life made possible by his racial privilege, they are able to interrogate that uncomfortable unfairness without the distraction of guilt or knee-jerk defensiveness.

Literature frees us in this way. It gives us a space to explore possibilities before we have a chance to discount them because we might be implicated.

Let me give you another example of how America’s literature can take us directly into systemic disparities. Read Frederick Douglass’s autobiography alongside Benjamin Franklin’s. Both men are bright, resourceful, disciplined, confident, hard-working. Both men illustrate the power of literacy. Yet their routes to autobiography look starkly different — Douglass, who was born in slavery, must break the law in order to write his. Systems both create and limit opportunities.

Margaret Walker’s “Jubilee” depicts a young couple who spend their lives being flooded, burned, chased out of the 40 acres and mule promised upon their emancipation. The title of Paul Dunbar’s story “The Lynching of Jube Benson” states upfront how things are going by the time of Jim Crow. In “Passing,” Nella Larsen’s protagonist passes as white until she doesn’t. Richard Wright’s “Bright and Morning Star” illustrates police brutality targeting Black men and their elderly mothers alike. Lorraine Hansberry’s play “A Raisin in the Sun” depicts a middle-class Black family stymied by redlining. And on it goes.

The ghosts swarm the stories of every decade of every century since this nation came into being.

The good news is that they take us in and take us through. This does not mean they give us a way out.

Kristin Van Tassel teaches writing and American literature at Bethany College in Lindsborg, Kansas. She lives on a small farm near Gypsum with her family.

LGBTQ community, people of color in the crosshairs of banned… by Ariana Figueroa April 18, 2022
‘We have the watch’: Stories from inside NORAD on 9/11 by Emma Athena September 11, 2021
Kansas welcomed a pawn shop for the rich in exchange for a… by Sherman Smith April 24, 2022