In the final week of the 2nd District campaign, LaTurner released an advertisement in the Topeka and Joplin, Missouri, media markets advancing a Republican talking point that Democrats were dedicated to “defunding” law enforcement agencies. LaTurner’s commercial was based on documents showing a decline in full-time equivalency employment in the Topeka Police Department from 382 in 2013, when De La Isla joined the city council, to 352.5 in 2019, one year after she became mayor.

“Not coincidentally, as the number of police employees has fallen, violent crime has skyrocketed,” said LaTurner, a Topeka resident who serves as Kansas state treasurer. “These defunding-the-police policies represent the same radical agenda she hopes to bring to Washington D.C.”

LaTurner’s campaign was previously criticized for editing video from a De La Isla news conference to create a deceptive ad leaving the impression she bragged about spending cuts to Topeka law enforcement.

In that news conference, De La Isla made clear neither the city council, mayor’s office nor police department had slashed spending on law enforcement activities in Topeka.

De La Isla, who became mayor in January 2018, said the latest incarnation of the attack by LaTurner was false. Her campaign directed voters in the eastern Kansas district to evidence in the Topeka Police Department’s budget, which showed City Hall increased spending on the police department from $35.4 million in 2017 to $40.9 million in the current year.

Stephanie Houghton, manager of De La Isla’s congressional campaign, said this line of criticism from the GOP nominee appeared to be LaTurner’s bid to win by deception on Tuesday.

“Mr. LaTurner is becoming increasingly desperate as more lies and deception are brought to light,” Houghton said. “Kansas won’t fall for it. The facts are that under her leadership as mayor, the Topeka Police Department’s budget has increased by $5 million. It is left up to the police chief to distribute that budget within his department.”

The number of Topeka Police Department’s criminal investigators has grown during De La Isla’s time as mayor from a total of 53 to 66. The department’s full-time equivalency staff stood at 352 in 2019, essentially unchanged during the most recent four-year period.

Staff cuts are contemplated under next year’s proposed budget for the Topeka Police Department, but those changes would apply exclusively to civilian jobs in animal control, the vehicle impound lot and other areas. The number of sworn law enforcement officers in the Topeka Police Department was 295 in 2018, 299 in 2019 and 2020 and would remain 299 under the proposed 2021 budget.

LaTurner’s campaign-closing commercial claimed “the cuts she has made to the Topeka Police Department” caused “serious damage to the city of Topeka during her time in public office.”

In a statement, LaTurner said De La Isla attempted to cover up her actions “with press conferences full of spin and lies.”

De La Isla, who participated in a peaceful Black Lives Matter march with Topeka Police Chief Bill Cochran, said previously that Laturner had devoted months to a campaign of lies about her beliefs and decisions.

“That’s what candidates do when they have absolutely nothing to say about their opponent. Basically, he knows he has crossed the line,” she said.

LaTurner had launched a campaign for U.S. Senate, but withdrew at the urging of prominent Kansas Republicans. He was asked to challenge U.S. Rep. Steve Watkins, the 2nd District Republican who narrowly won the seat in 2018. LaTurner won the primary, in part, because Watkins was charged with election fraud in July by the Shawnee County district attorney. 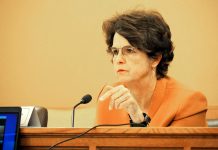