Heriford is the owner of Lawrence’s beloved Ladybird Diner, which got Washington Post attention followed by a burst of local coverage in mid-September for her pivot to free lunches during the pandemic.

To help fund that ongoing effort, this month Heriford published “Ladybird, Collected,” a batch of personality profiles and meditations on what is essentially the communist utopia she’s created on Massachusetts Street.

“I never ever ever would have written a book if it wasn’t my very last idea and the only thing I had to sell,” she told me.

Now, she said, it’s strange to think it’s out there and people are reading it.

“Even if it’s total crap,” she said of her book, “no one can say that because it’s a fundraiser for people who really need food.”

So here’s an honest book review: I don’t know what I expected, but I was stunned to discover that Heriford might write as well as she bakes.

Here’s her description of the “pain in the ass” that is pie:

When roused from its nap on the cooling rack, a piece of pie will likely slump, undignified and oozing its filling while its once perfect crust slips out of alignment in rebellion at having been manhandled by a spatula. Pie is testy, its dough cantankerous (sometimes downright mean) in the hands of anyone who overlooks either the precise chemistry or the matronly patience to yield a pastry neither too flaky nor too firm. “Touch me,” says the dough, “but not too much, and not there. Now back away, don’t even look at me!”

Heriford was born in Olsburg, half an hour north of Manhattan, where her parents were, she told me, “hippies living off the land.” The family moved to Manhattan and then, when she was 13, to San Diego.

“I came into myself in Southern California,” she said, then “bounced around a lot — Mexico, school back east, back to California, Arizona.” 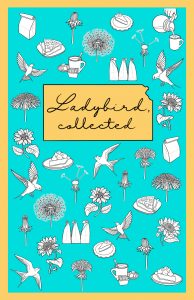 of returning with a baby and “a husband who had never set foot east of the Gila National Forest,” evoking the romance of four seasons in 25 perfect words: “gentle thunderstorms outside screened-in porches, piles of leaves from golden oaks and bright red maples, snow angels, the impetuously early skyward probes of a daffodil.”

Now, she writes, “to watch my mom walk a trail through the Flint Hills with my kids puts me smack in the middle of the infinite loop, feeling the coming and going of time and blood as sure as the wind on my face.”

Such outdoor moments are occasional breaks from inside the packed and hectic restaurant, where most of the action takes place. Heriford writes short but keenly observed and deeply personal portraits of her employees, who show extreme grace even when customers don’t.

Most customers, though, are part of the exemplary community Heriford has cultivated.

Regulars are to a small business what an extensive percussion section is to an orchestra. They bring their own quirks and add predictable beats in unique percussive tones, some high and jangly like tambourines or bells, others harmonious and low, humming way down on the register. Some are huge and hilarious personalities, cow bells and wood blocks commanding the rhythm for whatever amount of time they’re in the building. It gets quiet when they leave.

– from Here Come the Regulars

Many of the book’s short chapters feel like journal entries Heriford might have scribbled in a few minutes stolen to sit down and slam a cup of coffee; in reality, they’re repurposed from what she’s written at night after unwinding and then posting on the diner’s Facebook page, where anyone can read for free but should donate anyway.

“What the book sales meant was that I was able to open up the menu and start crafting more intricate meals for people,” she said. “Over the summer it was a lot of hot dogs and cold cut sandwiches, doing the best with what we had. Now I can afford to pay a couple of people to help me with prep and we’re doing really beautiful food.”

On the day we spoke, it was beef teriyaki with rice and broccoli, and chowder for vegetarians. Each to-go lunch has an entrée, side, fruit and a treat for later.

Ladybird has always been a place where people would show up and say they’d heard they could get something to eat.

“We’d hand them a menu and they’d get the same service and level of treatment as everyone else,” Heriford said.

Small businesses, she noted, have been doing the same thing in one way or another for a long time.

“I hope that when we say the word ‘community’ that we’re not just talking about people who can afford to pay us. I hope we mean everyone,” she said. “I’m in the businesses of feeding my community. Most of them pay me for that and others don’t have the means. All I can say is it works out.”

She said she was surprised to learn she could operate within “this really flawed system” (she meant our capitalist economy in general) and make her own rules about what success looks like.

“I feel an awful lot better about doing this work,” she said, “if we’re really using everything we’ve got to shore up the community that makes this so much fun.”

Recently someone told Heriford they were proud of her and disappointed in our leaders and politicians.

“My comment was, ‘Maybe the reason I can see all of this is because I’m not a leader or politician,’” she recalled. “I do think we need to put the pressure on. I also don’t think I’m going to wait for them to enact the policies I want to see. I’m just doing it.”

She followed that comment with a two-word phrase suggesting everyone else should get out of the way.

“If this empowers anyone to look around and question what tweaks they can make in their own little corner with the resources they have, let’s just do it,” she said. “There’s no sense in waiting for the legislature to agree.”

The Legislature doesn’t even convene until after the first of the year. Heriford, meanwhile, said she can keep serving free lunches through January.

Maybe even longer, she said, “if people buy more books for Christmas presents.”

LGBTQ community, people of color in the crosshairs of banned… by Ariana Figueroa April 18, 2022
Contract for Deed: The promise of homeownership that often… by Steve Vockrodt March 5, 2022
‘We have the watch’: Stories from inside NORAD on 9/11 by Emma Athena September 11, 2021