The 32-year-old LaTurner won by a 55-41 margin after a campaign marked by his dubious assertions that De La Isla wanted to defund police. He appealed to voters with an emphasis on faith in God, the importance of family, love of country, and the dignity of work.

“There are those who would have you believe the American Dream is dead, but it is alive,” LaTurner told supporters at a block party in his hometown of Galena. “It is alive with the farmer who gets up at the crack of dawn and doesn’t know what the weather is going to bring. It’s alive with the couple that takes out a second mortgage on their home to open up a small business. It’s alive with the single parent who’s working a full-time job while taking online classes to make it through their college degree.

“It’s alive here tonight, and I want you to know that I’m going to go to Washington, D.C., and make sure we keep it alive for future generations.”

Former Lt. Gov. Tracey Mann, a Republican from Salina, defeated Democrat Kali Barnett, a music teacher from Garden City, by a 70-30 margin in the sprawling 1st District that covers much of the western two-thirds of the state. Republican Rep. Ron Estes defeated Democrat Laura Lombard, a business development consultant, in the Wichita-area 4th District by a 65-35 margin.

“In this race, Kansans spoke loud and clear,” Davids said. “They rejected the tired politics of the past, of the slashed school budgets, being denied coverage because of having a pre-existing condition. They chose a different vision for who we send to the United States Houses.”

Democrats hoped that record turnout would place them in contention in congressional races this year. More than 813,000 Kansans cast votes by mail or in person before the election, and another 400,000 turned out to vote on Tuesday. The early leads posted by Democrats evaporated quickly as Election Day ballots were counted.

The nomination of Adkins and the four Democratic contenders made history as Kansas showcased more women candidates for Congress than ever before.

“I know a lot of people have just gotten really actively engaged,” Barnett said. “I ran into someone in the community a few days ago that said, ‘Wait, I know I’ve seen you somewhere. Oh, You’re the woman on TV that’s trying hard to make a difference. And I just thought, wow, you’re a breath of fresh air — a young woman who’s trying to make a difference, and I’m absolutely going to vote for you.’ ”

In the 2nd District race, De La Isla frequently battled LaTurner over false claims about her gutting police resources, and she attacked the Republican as a handpicked ally of former Gov. Sam Brownback.

De La Isla, 44, was born in New York and raised in Puerto Rico. She was homeless and a teenage mother before graduating from Wichita State University in 2001. She moved to Topeka in 2005.

Speaking at the Democratic watch party in Topeka, the mayor said she was “excited by the sisterhood” that developed among the Democratic candidates for congressional office.

“I’m proud to say we have run a race that is a model race, a clean race, a race that not only has made Kansans proud — but you know what, most importantly, it has made my daughters proud,” De La Isla said.

Brownback appointed LaTurner to fill a seat in the Kansas Senate when LaTurner was just 24 years old, then later appointed him to the treasurer post. LaTurner won election for the office in 2018, and defeated embattled incumbent Rep. Steve Watkins in the Republican primary in August.

President Donald Trump endorsed LaTurner on Saturday via Twitter: “@JakeLaTurner will be a phenomenal Congressman for the people of Kansas! He will help us Lower your Taxes, Support our Brave Law Enforcement, Build the Wall, and Protect and Defend your Second Amendment. Jake has my Complete and Total Endorsement!”

In Johnson County, the comparisons to Brownback were more damaging for Adkins, a former Brownback adviser and Brownback-appointed chairwoman of the Kansas Children’s Cabinet.

Davids, the first Native American woman and member of the LGBTQ community to represent Kansas in Congress, attacked the Republican for wanting to dismantle the Affordable Care Act and its protections for pre-existing conditions. Adkins touted her business experience and, as an executive of a health care technology company, railed against government-run health care.

“These delusional socialists in Congress are completely out of touch with our Kansas values,” Adkins said when she announced her campaign. “Their obsession with identity politics is unrealistic.”

Estes, a former state treasurer, won a special election in 2017 to fill the congressional seat vacated by Mike Pompeo. He then won re-election two years ago.

He described himself as a champion for tax reform, free and fair trade, and retirement security.

“I’m working to bring home the supply chain,” he told voters, “because we can no longer rely on having food, critical medicine and protective equipment made in China.

His opponent, Lombard, said she was motivated to run because Republicans like Estes had emboldened the president’s “corrupt and authoritarian behavior.”

“There is real concern about the future of our democracy and our country,” she said.

Mann arrived on the political scene in 2010 with objections to the citizenship of President Barack Obama. The commercial real estate broker finished third that year in the Republican primary for the 1st District nomination.

Colyer chose Mann, who renounced his doubts about Obama’s birthplace, to be lieutenant governor in 2018 after Brownback left for an ambassador role in Trump’s administration.

“I will fight to restore fiscal discipline in Congress and will support sound agricultural policy,” Mann said. 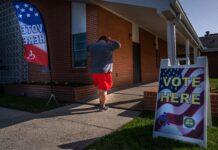 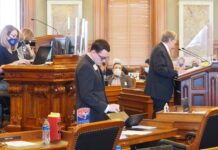 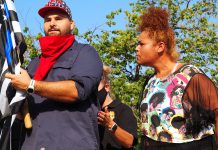 What Senate Republicans are saying about Trump’s impeachment trial