TOPEKA — As Steve Stites, the chief medical officer for the University of Kansas Health System, tried to get the message out Friday that hospital resources are more scarce than previously thought, he began to pound his desk.

Kansas City area hospitals are approaching the point where they will have to choose who they provide care to, he said, because there isn’t enough staff to care for the continuously rising number of COVID-19 patients. Hospitals have had to refuse transfers of COVID-19 patients from the state’s rural areas, he said, which also have run out of space.

“At our institution, now, COVID is the leading admission diagnosis,” Stites said. “I mean, a year ago, there was nothing. And now it is the leading reason to come in the hospital.”

He began to emphasis his words with the drumming of his fist: “Not cancer, not heart attack, not heart failure, not COPD or emphysema. The No. 1 reason is COVID. Well, that’s a big change for us. And we’re headed right smack into the cold and other flu season, etc. We know this is always when hospital capacity is stretched. It’s not unusual for us to be full this time of the year. But now we’ve got 10 to 15% more patients from just one disease.”

Health officials from private and public entities, local and state, have struggled for months to get more of the public to take preventative measures seriously. The consequences are dire.

The Kansas Department for Health and Environment on Friday said 79 deaths and 5,418 new infections had been reported since its last update, two days ago.

“Today’s case numbers, combined with the staffing and capacity issues hospitals are currently facing, is terrifying to me and to those working in public health,” said KDHE secretary Lee Norman. “If you are sick, please stay home and contact your health care provider.”

KDHE’s online dashboard shows 33% of intensive care unit beds remain available across the state, including 36% in Kansas City. But health officials say the actual number of available beds is much lower because hospitals lack the staff to care for more patients.

At one point this week, there were 32 empty ICU beds at 11 Kansas City area hospitals, but KU Health said the number that could actually be staffed was just 22. Stites said within the KU Health System there were 277 patients hospitalized for COVID-19 as of Monday. By Friday, the number was 318 “and climbing.”

Hospital officials are looking to delay surgeries and extend workloads for nurses in anticipation that the pandemic will continue to get exponentially worse.

David Wild, vice president of performance improvement for KU Health, said it wasn’t clear how long it would take before hospitals no longer have the resources to treat new patients.

Gianfranco Pezzino, the Shawnee County health officer, said the past two weeks have been the worst of the pandemic to date. Last week, the county saw a 70.4% increase in cases and the percent that tested positive nearly doubled, from 5.4% to 10.7%, exceeding all previous marks. There were so many new cases, health officials are unable to do contact tracing for some of them. Of the new infections, health officials have no idea how 82% acquired their infections.

Topeka hospitals were at 81.7% capacity, Pezzino said, but actual space was far less because of staffing limitations.

“I can tell you today there was a hospital with only one ICU bed available,” Pezzino said. “I don’t know you, but that gives me chills. It’s just like being one car wreck away on I-70 from a major crisis, because you don’t have ICU beds or acute care beds to put patients.”

“You get the idea,” he said. “Every situation that brings two or three people, or you know a certain number of people, together is a risk for the transmission.”

He said he wouldn’t be surprised if the numbers continue to get worse, and that “it doesn’t need to be like this.”

“It will depend in large part, once again, on the extent to which his community and its leaders are willing to make some more sacrifices now to prevent more problems in the future,” Pezzino said. 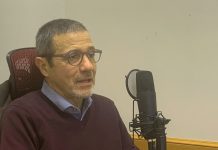