Heading into November’s general election, Kansas Secretary of State Scott Schwab’s office had sent out more than half a million advance-by-mail ballots — more than twice as many as in 2016. (Sherman Smith/Kansas Reflector)

On Friday afternoon, as it became obvious to everyone that the president would not win another term, U.S. Sen.-elect Roger Marshall was writing checks that reality couldn’t cash. 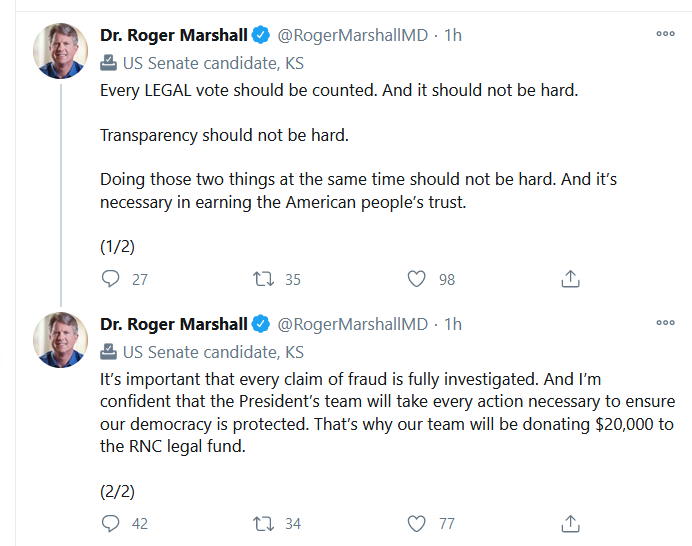 Besides helping to pay down the president’s re-election debt, Marshall might want to be careful what he wishes for: What Kansas learned from Kris Kobach was that, while voter fraud is rare, it tends to involve Republicans.

Marshall’s run as a U.S. senator could be entertaining, though I’m far from ready to joke about any of the damage his wing of the Republican Party has inflicted on our barely holding-on democracy — and how much more it could do in the six years between now and the time he’s up for re-election.

Not entertained, and not willing to waste whatever sense of humor I have left on Marshall, I’ll instead take what I hope is not a fleeting opportunity to contrast Marshall’s message with that of another Kansas Republican: Secretary of State Scott Schwab.

Although he could have spoken up a lot more loudly, Schwab was at least a quiet voice of sanity — and truth — as his fellow partiers mounted a full-on, lying assault on mail-in ballots over the past several months.

Let’s look at June, when the president tried to change the subject after a humiliating rally in Tulsa, Oklahoma:

“The thing we have going for us, especially when there’s intense division in the country, is that we have peaceful transfers of power and a way of resolving it is to have an election,” Barr said.

He made an ominous addition: “But when state governments start adopting these practices like mail-in ballots, that open the floodgates of potential fraud, then people’s confidence in the outcome of the election is going to be undermined.”

Kansas was a long way from “starting to adopt” such a practice. People in Kansas have been voting by mail apparently incident-free for nearly a quarter of a century.

By the time of Barr’s dark lie, Schwab had already spent months affirming the safety of mail-in ballots.

“Kansas voters have multiple options to cast their ballot — advance in-person voting, election day in-person voting and advance mail ballot voting,” he said in March, when it became clear how disruptive COVID-19 would be.

In May, after the president said this:

Schwab told KAKE-TV: “Kansas is not a high cheat state.”

The president kept tweeting, and Schwab kept having to refute him.

“I don’t know what the president’s talking about when he says he’s concerned with mail ballots,” Schwab said at a media briefing on Oct. 20.

Kansans went on to vote by mail, in the primary and then in the general, in astounding numbers, safely and without incident, thanks to Schwab, 105 county election officers and a legion of other workers.
If Kansas were a swing state people watched closely, we’d make Pennsylvania jealous.

As the Republican Party recovers from its loss of the presidency, it will need to keep feeding the beast it created. Politicians who rode Trumpism to power will double down on dangerous dishonesty.

Schwab could be a hero by refuting lies more loudly, though that seems politically unwise at the moment. Here’s hoping he at least remains a quiet counterweight, keeping his head down, doing his job competently and maintaining integrity as he inevitably ascends.

More immediately, Republicans who would like to see less of the party’s Marshall wing might recall the strong words Schwab used in July, after the president suggested delaying the November election.

“In Kansas, we have implemented measures to ensure the security and safety of the August and November elections. We respectfully ask the Kansas delegation to not support any delay to the November election,” Schwab said. “Now is not the time to act in fear but to show the world we are courageous.”

U.S. to hit debt limit much sooner than expected, thrusting… by Jennifer Shutt January 13, 2023
In 2022, Kansas Reflector staffers covered shocking upsets… by Clay Wirestone January 2, 2023
Kansas welcomed a pawn shop for the rich in exchange for a… by Sherman Smith April 24, 2022