Unlike so many other people who’ve been out of work during the pandemic, Manhattan photographer Doug Barrett has been busy.

His photos from protests in Manhattan after George Floyd’s murder brought him attention from places like the BBC, Fox News and Time, whose editors were apparently intrigued by images of Black Lives Matter protests all the way out in Kansas and asked Barrett, whose company is 400 North Creative, to share his story.

“I was a former police officer in Gwinett County, Ga., working in SWAT and narcotics. So, part of why I feel comfortable shooting photographs and getting into the thick of things is because I understand the law enforcement perspective,” Barrett wrote.

Then Time reprinted, almost in its entirety, the exhausted explanation Barrett wrote about it all on Facebook.

My camera dangles from my neck and my inhaler may be in my pocket but I assure you it’s not a gun. I’m a former police officer so I speak from experience, I’m a US military veteran, I have a master’s degree, I’m a Master Mason, Thirty Second Degree Scottish Rite, Knights Templar, I’m a member of Kappa Alpha Psi Inc, I volunteer at my church protecting the flock, and serve as an active member in my community yet because of the color of my skin and those who look like me will always be a threat.   – Doug Barrett in a Facebook post reprinted at Time.com

Barrett joined the military after his career as a police officer and was stationed at Fort Riley. He didn’t want to go into details about the injuries that required three surgeries and led to a medical retirement.

“I decided I was going to stay here in Kansas,” he told me.

Coming from Atlanta, he said, everything about Manhattan was a culture shock.

“But it put things into perspective,” he said. “There’s a small-town feel where you’re able to learn your neighbor, have a community of folks, a different side to fast hustle and bustle of life.”

He’s taken pictures ever since his father gave him a camera for Christmas when he was 10.

“I was that kid in high school who always had a video camera, was always snapping pictures,” he said. “After I got out of the military and rehabilitation, I started tinkering again.”

His master’s degree was in cyber-security and he was working as a remote senior project manager while doing photography on the side. His job allowed him to travel, and Barrett began taking pictures of his fellow veterans he noticed on the street.

In 2018, he quit the day job to do photography full time. And since this summer, he said, photo editors at major media outlets around the country are finally assigning work to Black photographers.

“We’re doing the same work we’ve always done, but now photo editors are actually giving us the time of day, saying, ‘Let’s be inclusive,’ ” he said.

Among the many collections on his website is his Homeless Veterans Project. Since he started taking their pictures, he’s made portraits of 75 veterans in 16 states. Each image is accompanied by a short description of the person and their circumstances.

“What I’ve learned is these veterans are at such a vulnerable state they couldn’t even take an apartment if you gave it to them,” he said. “Because they’re thinking, ‘Where’s my next meal?’ ‘How do I get myself clean?’ They can’t take a job because they don’t know how they’re going to bathe themselves or cut their hair or brush teeth to be presentable for a job.”

There’s one image in particular he uses to explain the importance of this work. It’s the picture at the top of this piece, a photo of a man named Samuel, taken on a day in Atlanta when it was 101 degrees.

“I saw a guy, you could tell through his physique that he was an athlete or prior military,” he said.

His creased, old-school black pants and his military cap were other signals.

“I approached him, got that comfortable distance,” Barrett remembered. “He said he’d got kicked out of homeless shelter. He was 61 years old and got kicked out for fighting.”

Samuel explained that for three months in a row, he’d been jumped by young thugs who knew he’d be getting his disability check.

“On the third month, he defended himself. The homeless shelter saw him fighting and kicked him out,” Barrett said. “If you’re kicked out, the VA won’t send your check. You have to go around and get your name on a waiting list to get into a homeless shelter. With no address, he had no way of getting the money he’s entitled to. People would walk by and say, ‘Bum get a job.’ This man served in the Marine Corps.”

Barrett, whose photos are now in the permanent collection of the Marianna Kistler Beach Museum of Art, said he hopes people who see the images might understand that they, too, are one paycheck away from similar circumstances.

“People who’ve seen these stories want to give me money,” Barrett said, “but I’m just a photographer out documenting these stories.”

Now, though, people can give money. Through the Greater Manhattan Community Foundation, Barrett has created a 501(c)(3) called Served Silent Homeless but not Hopeless. On Veterans Day, donations are doubled through the U.S. Armed Forces Stand-to-Match Day.

Besides taking pictures, the foundation’s webpage explains, Barrett’s organization has “been across the country and has taken veterans food, coffee, hot cocoa, brought shoes for the shoeless, tents for those who needed shelter, boots for those in the winter, bus tickets for those trying to get to medical appointments.” 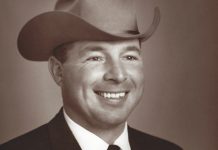 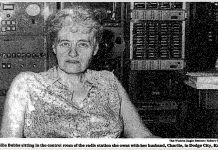 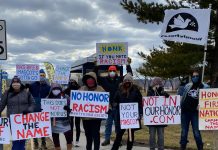 Listen to this kid who worked to make Kansas better for...

Kansas Republicans, prepare yourselves for a ‘come to Jesus’ election