TOPEKA — Leaders of the Kansas Legislature plan to develop a comprehensive strategy for securing the Capitol from coronavirus during the session scheduled to start in January that is likely to prompt ideological chafing among lawmakers not thrilled by public health mandates.

Surging numbers of COVID-19 cases in Kansas compelled GOP and Democratic legislators on the Legislative Coordinating Council to begin preparations Thursday for how best to shield 125 representatives, 40 senators and others regularly in the Capitol from the deadly virus when the session begins Jan. 11. Escalation in the number of cases, hospitalizations and deaths tied to the coronavirus prompted Gov. Laura Kelly to issue Wednesday a revised statewide mask mandate.

House Majority Leader Dan Hawkins, a Wichita Republican, said his conversations with men and women elected to serve in the 2021 session revealed keen interest in personal safety amid the pandemic.

“A common theme is they truly want to make sure that we’re going to keep them safe,” Hawkins said. “Our members want to have assurance that when they come in we’re operating in as safe a manner as possible.”

That view stands in contrast to attitudes of some legislators who denounced the Kelly administration’s ideas on wearing masks, social distancing and avoiding mass gatherings as well as her controversial orders this spring to temporarily close schools and businesses.

There are dozens of state legislators who refuse to wear a mask during committee meetings at the Capitol. At least one new member of the Legislature, Sen.-elect Mark Steffen, a Hutchinson Republican and a physician, has ridiculed research supporting a recommendation that people wear a face covering to deter spread of the virus.

“Individuals should know that there is no known benefit arising from wearing a mask in a viral respiratory illness epidemic,” Steffen said in a social media post. “In an absence of knowledge, governments should not make policies that have hypothetical potential to cause harm.”

Hawkins said there wouldn’t be universal praise among legislators for whatever plan was adopted by the Legislative Coordinating Council.

“Some of them are going to be probably rather touchy,” he said. “There’s going to be some people who won’t like it. Some people will. It’s just our duty and our responsibility to make sure our operation does allow them to be as safe as possible.”

The state’s legislative leadership are expected to consider new policy on wearing of masks, installation of plastic barriers, daily testing requirements, housekeeping expectations, protocol for House and Senate votes, and the public’s ability to be in the Capitol. It’s possible access to House and Senate galleries used by the public could be restricted and that public access to legislators’ offices could be limited.

There are complexities that range from the personal medical condition of legislators to the intepretation of constitutional mandates on conduct of business in the annual legislative session.

House Speaker Ron Ryckman and Senate President Susan Wagle agreed it would be prudent for legislative leadership to draft a set of anti-coronavirus recommendations for operating the next session. The proposal should be shared with the new House and Senate leadership — determined in December through partisan elections but not officially seated until January — before a final decision on preventative steps.

“I’m hopeful that I can hear about the proposal and take them to my new president-elect and the new leadership team and ask for their input before I vote on the proposal,” said Wagle, who didn’t seek re-election in 2020.

“Obviously, we want our members to abide by the ones they’ve selected to make these decisions,” Ryckman said. “I think it will have more teeth.”

Members of the Legislative Coordinating Council agreed to allocate $3 million to upgrade audio and visual technology in the Capitol. The goal is to have both legislative chambers and 13 committee meeting rooms in the building ready by January with the cameras, wiring and equipment needed to effectively host either in-person and remote gatherings.

Without expansion of infromation technology capacities in the Capitol, some committees would be left to operate without transparency if the building was closed to the general public.

Tom Day, director of Legislative Administrative Services, said the state lacked a clear policy on the public’s right to bring protest signs into the Capitol.

“We did have some issues, as you are well aware, the last week of the session in March … with individuals bringing in signs and noise-maker type things,” Day said. “We probably need to either pass a statutory change or make it more clear in the LCC policies regarding signage.”

Day said the Kansas Department of Administration had asserted control over the first and second floors of the Capitol, which means signs could be allowed inside the building through the secure entrance and carried on those two floors. It’s unclear who would be responsible for enforcing a legislative branch ban on signs if carried to the upper three floors of the statehouse, he said.

In addition, GOP members of the Legislative Coordinating Council expressed interest in reversing a decision by the Kelly administration to convert to office space a room designated for “meditation” in the Capitol. This second-floor public space — Room 221 East — was created during the administration of Gov. Sam Brownback as an informal prayer space after attempts to establish a chapel.

Budget provisions adopted by the Legislature in 2018, 2019 and 2020 protected that space for meditation purposes, but the governor altered its use because the current 2021 budget didn’t require the room to be reserved for quiet contemplation. 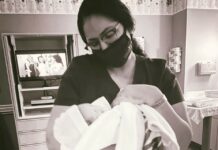 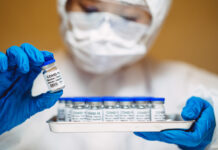 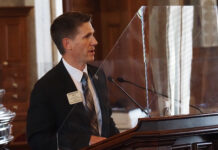