It wasn’t just because of her job.

“I do fear the trolls,” she confessed.

Sometime around Election Day, though, she was on Facebook and a memory notification from 2012 popped up.

“I’d posted one word to say my candidate won,” she said. “It was ‘Yes’ and an exclamation mark.”

The rest of that memory was painful.

“When my friend — who I thought was my friend — from church found out I voted differently from her, she posted the most awful post,” Wilson recalled.

Things like: “This makes my stomach hurt. I can’t believe you voted for this person. I thought you were better than that.”

“Then I had to make a decision,” she said. “I could unfriend her, but nope, I’m going to do the big girl thing: I called her.”

Wilson’s job equips her for this kind of thing. She’s director of the Kansas Institute for Peace and Conflict Resolution at Bethel College, the Mennonite-associated liberal arts college in North Newton.

The institute is “dedicated to resolving human conflict — both locally and globally.” It offers mediation services for “everyone,” from divorcing parents to community groups, and its staffers have trained thousands of educators throughout Kansas in how to create a culture of restorative justice in schools. Its Great Plains Consensus Council is “an agreement-building resource for public entities.”

Despite her training and years of experience in mediation and communication, though, it was not an easy decision for Wilson to call her hostile church friend.

“It wasn’t just, ‘Oooh, I’ve got these skills I’m just going to do this.’ Because it was really personal for me,” Wilson said.

“We had the best conversation,” she said.

I’d called Wilson because, despite some of those post-election calls for unity, I figure most Americans are too deeply entrenched in their tribal resentments to want to reconcile with family members and friends who’ve been deeply hurtful to each other for the last several years.

Some of us have too much direct experience with politics as not just a threat to our freedom but to our existence. We’re justifiably reluctant to come to a table with people who support policies that kill us.

“This would definitely be one area where we are struggling,” Wilson said. “How do we bring this country back together? Because we’re in a very divided state.”

But nothing will get better if we don’t at least try to understand each other.

“No one has figured out the perfect system,” she said, “but you’re not going to figure it out by not talking.”

The key is not to dive right into the fight, she explained.

“I think that’s the biggest deal — we want to get to the contentious points first: ‘I am opposed to this, I am for this.’ That’s not where we start,” she said. “You have to understand who you are and why this is important to you.”

Besides an overall unwillingness to engage, it’s even harder to imagine any Trump voters who’d be willing to participate in some of the processes her institute uses, which sound mighty snowflaky.

The talking circle, for example.

“It’s something that’s borrowed from indigenous communities,” Wilson explained. “People sit in a circle and use a talking piece. When someone has the talking piece, they have the floor. Everyone else is pausing so they can hear what with person with the talking piece has to say. The piece goes all the way around the circle. There’s a person leading, facilitating — the circle keeper — and through a series of prompts, people respond. That advances the conversation.”

I felt calmer just hearing about it.

“It’s OK that we disagree,” Wilson said. “People have fear, trepidation, ‘What happens if someone doesn’t take the same stance as me?’ Even in that, there’s a way people can find common ground. We do a lot of different processes to help people get to that space.”

I suggested that the Kansas Republican Party and the Kansas Democratic Party could make use of her institute’s mediation skills.

“That sounds figuratively like it could happen,” she said, indulging me. “I’m not suggesting it can’t.”

Her institute, she said, tries to be a place where people of any side — “conservative, liberal, progressive, whatever you want to label it” — feel welcomed.

“The challenge is how much people are willing to try something new as opposed to going their separate ways and assuming things about one another,” she said. 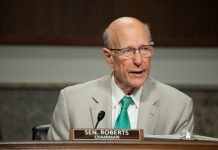 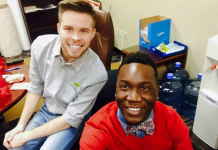 A Labor Day unlike any other provides more reasons to be...