CEDAR CREST — Bess and Betty stamped and snorted Tuesday morning in the guest parking lot of the governor’s mansion, where for 40 minutes they waited patiently and sometimes impatiently in fur-ruffling wind under a dapple-gray sky for the show to start.

By the time they put the replica 1880 hayrack in motion, they were practically champing at the bit.

“Damn, another work day,” they thought.

At least, that’s what their driver, Cecil Carter, figured the horses were thinking. He and his family own and operate 3C Carriage Service in White City.

Bess and Betty are draft horses. Specifically, Percherons. Gentle giants. Black beauties. Carter bought them from some Amish people back in 2010, when they were 3 or 4 years old and already trained to pull. They were silent about the horseplay of their Rumspringa.

The mares stand about 18 hands high, or six feet at their shoulder. They eat hay from Carter’s pasture. He doesn’t spoil them with grain or treats. And while it’s impolite to ask a girl her weight, Carter revealed each animal has between 1,800 and 2,000 pounds of heft on her.

They were at the governor’s mansion to deliver a Christmas tree and give Santa a ride — an annual celebration at Cedar Crest, about five miles west of the Statehouse in Topeka. 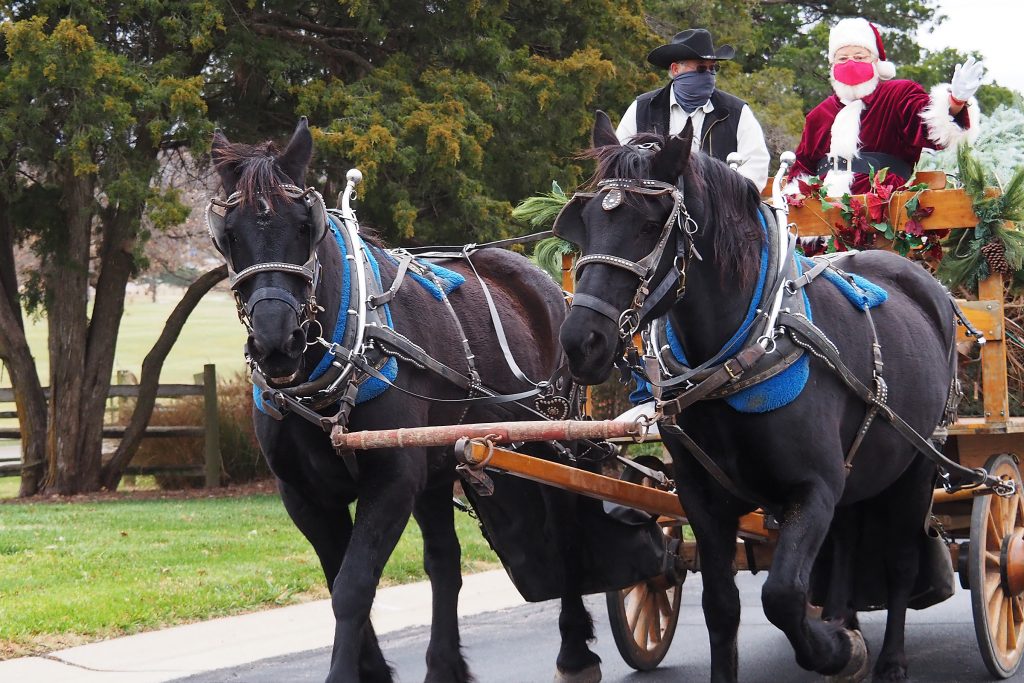 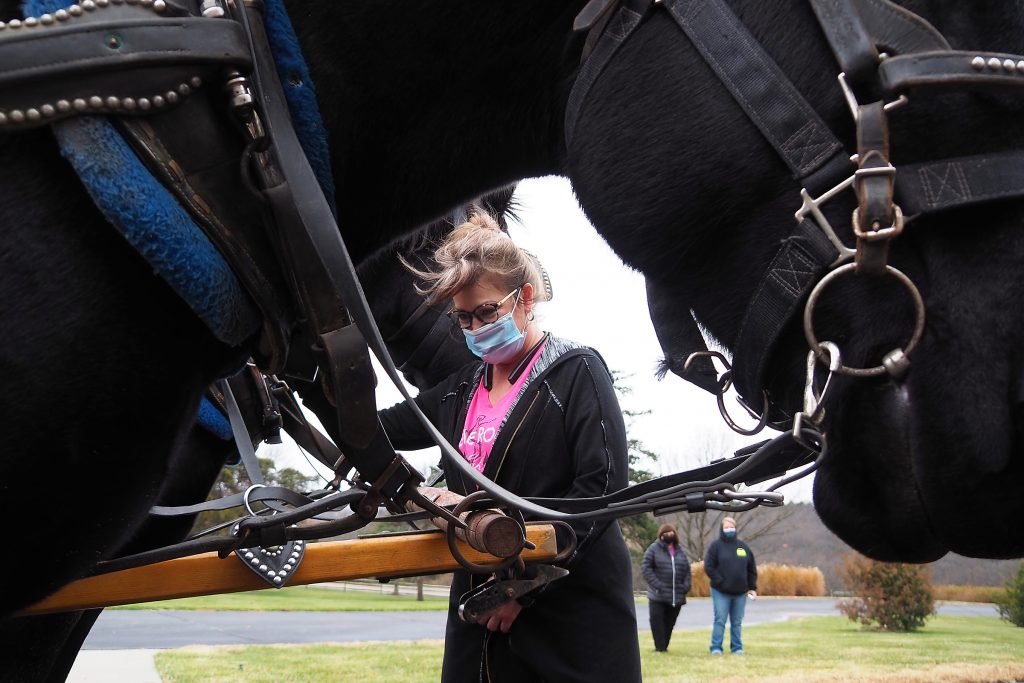 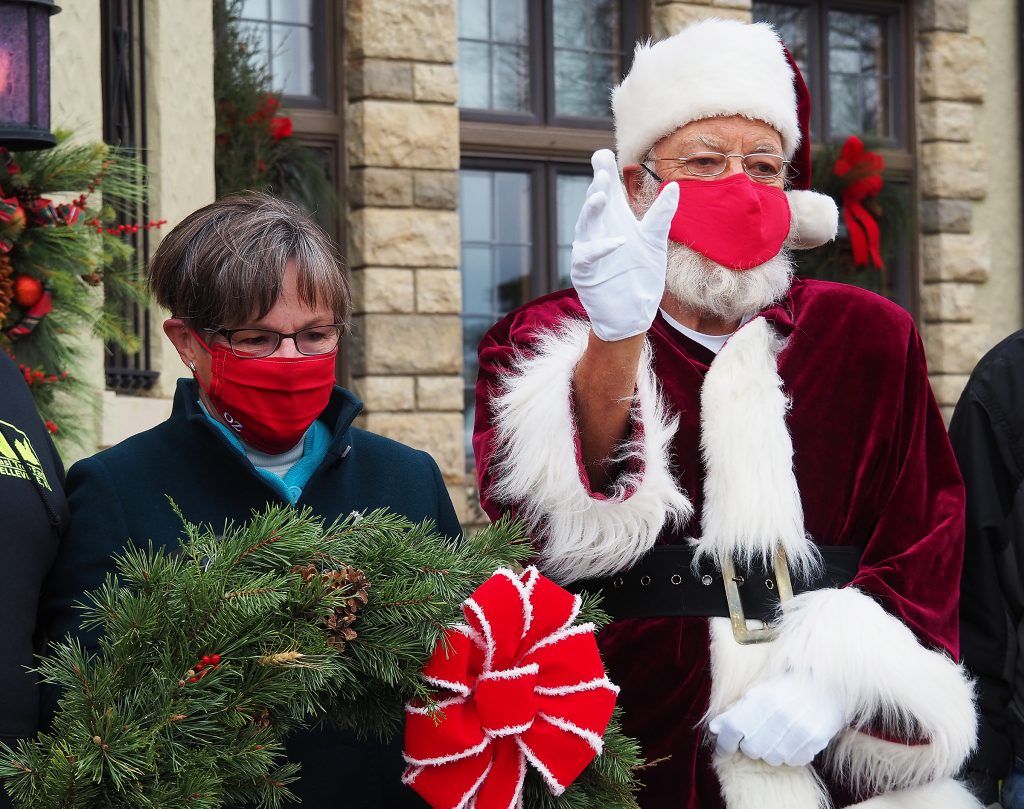 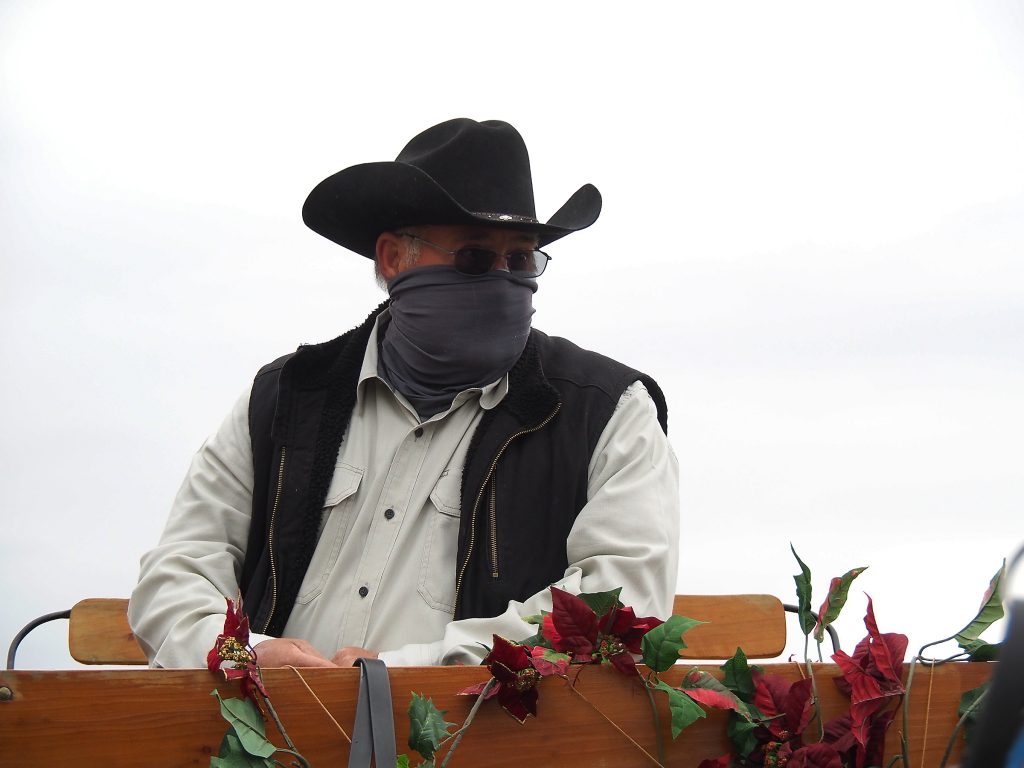 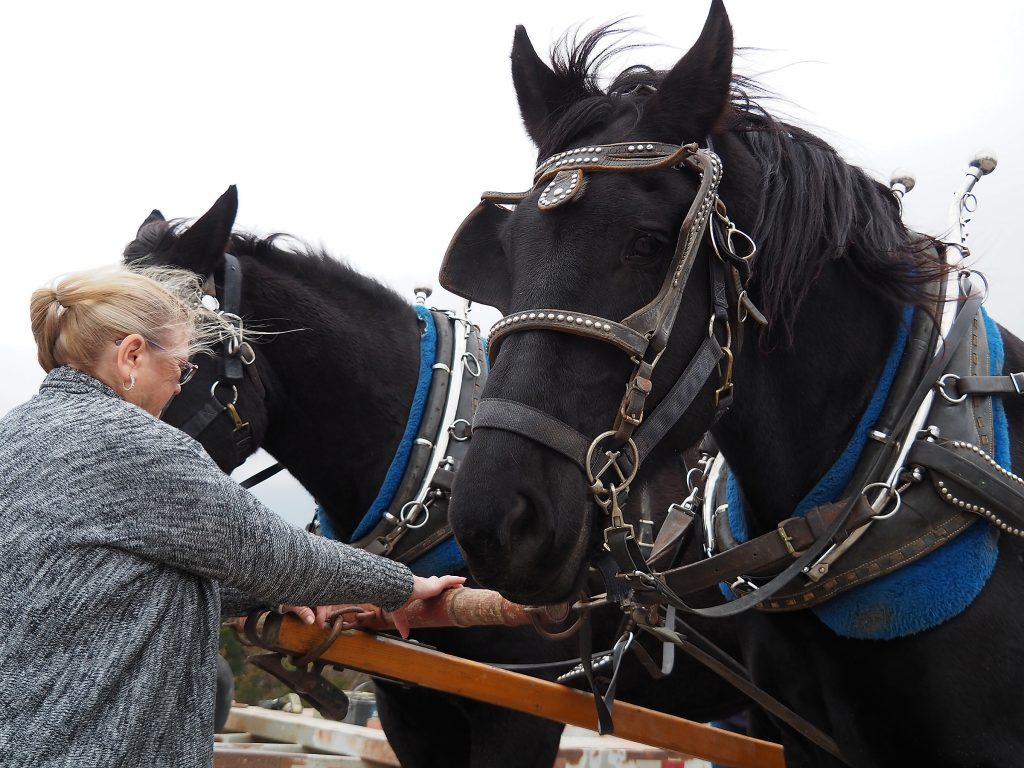 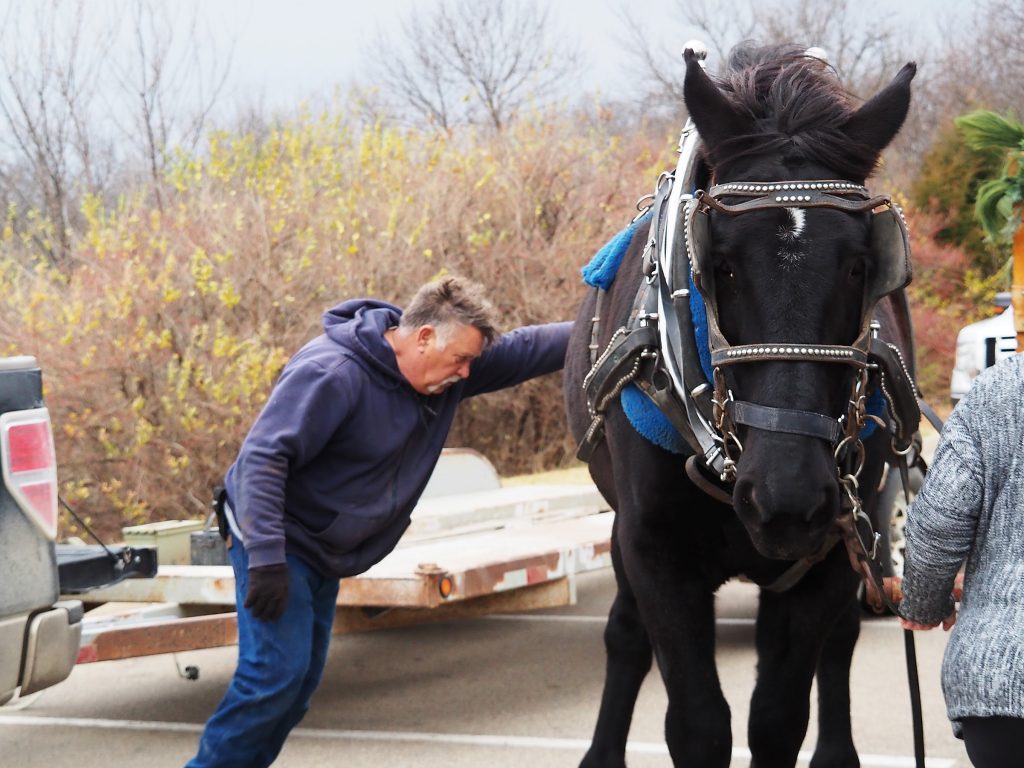 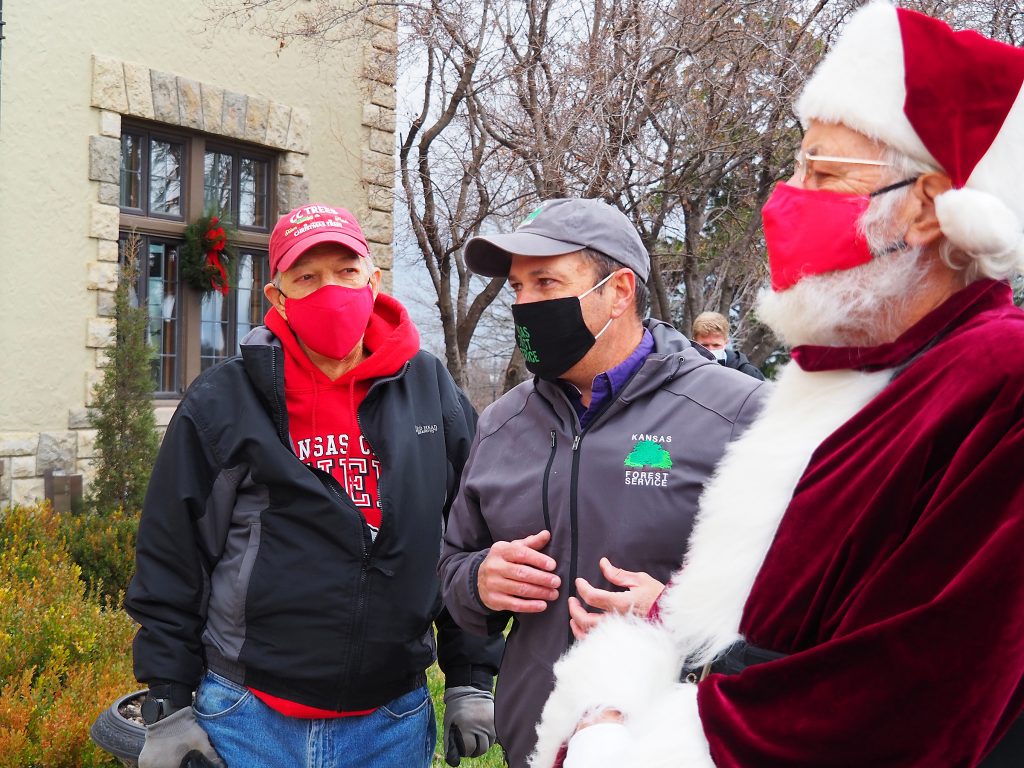 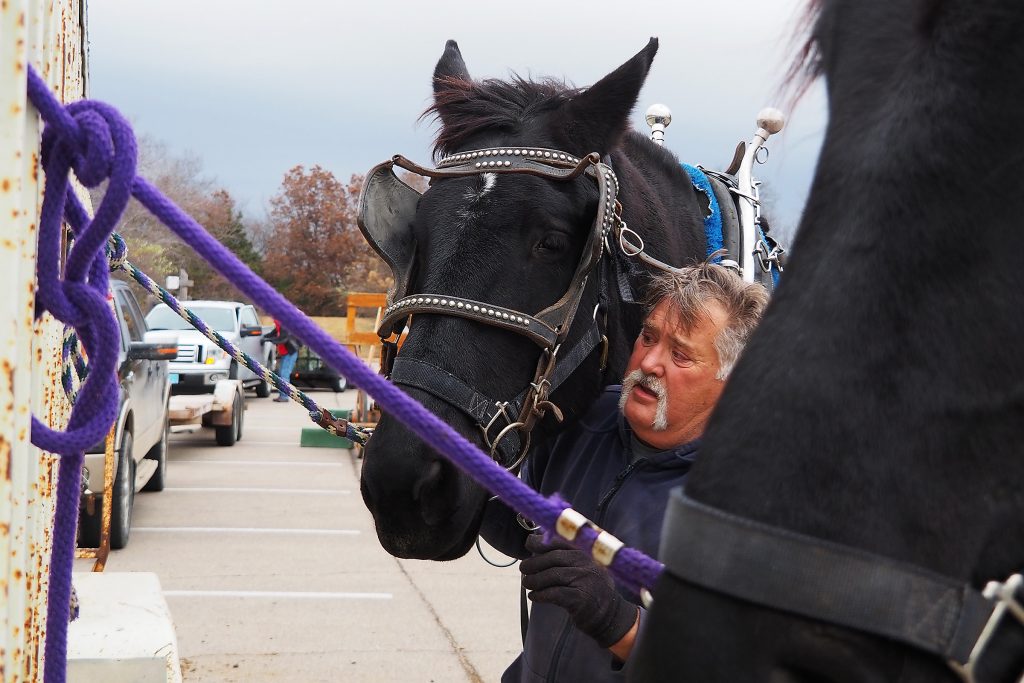 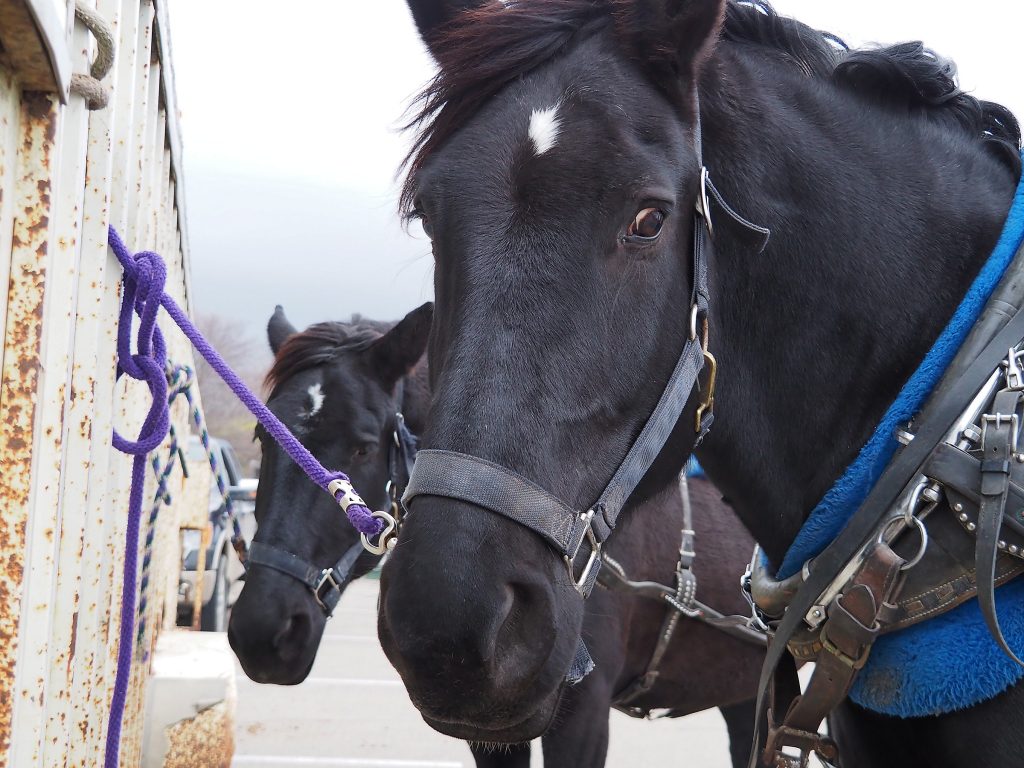 Bess and Betty have done this before, for Gov. Laura Kelly and her two predecessors. The carriage, built by Werner Wagon Works in Horton, weighs about 800 pounds, which is no big deal for horses like them. Carter said the two together were capable of pulling up to 32,000 pounds. They could even pull a semi out of a ditch like those showoffs on YouTube, Carter said, but he wouldn’t subject them to such a task.

They are well suited for interacting with the public. In a typical year, they make two or three appearances per month at parades, weddings, family gatherings, grand openings, Christmas parties and other social events. This year, because of the pandemic, they have seen no action.

Carter said they aren’t “high-spirited” like a race horse or quarter horse. They respond to verbal commands, so there is no need to use the reins.

“They’re out in the public all the time,” Carter said. “They stand still. They’re friendly with people. They’re a good team of horses — put it that way.”

Carter’s wife, Penny, helped him hold the team in place while he hitched them to the cart. She said she has been his better half for nearly 45 years now.

“Only when he wants me to be,” she replied.

This year’s tree is a Korean fir grown by Eldon Clawson and Marlene Ewing at Country Christmas Trees in Wakarusa. The rare breed’s needles are distinct for their white underside.

This particular tree was raised from seedling, 10 feet tall and 12 years old, and the only one to survive from a batch of 50.

“They’re not normally grown around here, but this thing has been a survivor,” Clawson said.

The horses made their way up the winding track to the front door, where the governor awaited. She posed for photos with state forestry personnel, tree growers, Santa, Carter and everybody else involved with the day’s pomp and circumstances.

Pausing to talk to news reporters, Kelly reminded Kansans of the importance of face covering and social distancing during Thanksgiving gatherings. Behind her, Bess and Betty stood at attention.

“I’m no horse aficionado,” the governor said, “so I’m loathe to rank their performance. But they got it here, so I would give them that credit. It’s cold, and I’m sure they feel it too.”

Kansas welcomed a pawn shop for the rich in exchange for a… by Sherman Smith April 24, 2022
As Wichita embraces efforts to reduce homelessness, profound… by Lily O'Shea Becker August 14, 2022
LGBTQ community, people of color in the crosshairs of banned… by Ariana Figueroa April 18, 2022