What happens when it’s Thanksgiving week and gratitude isn’t enough?

It’s not enough to say thank you to health care workers. While many of us have followed public health guidance and made sacrifices, our collective selfishness has now exhausted nurses and overwhelmed hospitals — despite months of warnings that this would happen.

“The long hours and crushing stress of their jobs, coupled with the concerns they have in their own daily and family life, is pushing many health workers to their breaking point,” Kansas health secretary Lee Norman wrote on Saturday, once again pleading with people to stay at home, keep a safe distance from others and wear masks.

Last week, John Eplee, a family physician at a hospital in Atchison who is also a Republican member of the Kansas Legislature, had an extraordinary lament.

“If I could do one thing, I would develop a time machine,” he told the Reflector, “go back, get national guidance, get a strong mask recommendation for the entire United States and, honestly, have public figures that would wear masks and strongly encourage everyone to wear a mask to save us from this terrible, invisible enemy.”

No one would need to wish for a time machine if more people had just listened to Norman and all the other public health professionals — some of them threatened with violence — who have been begging people to wear masks for months.

Instead, we’ve given too much attention to the anti-public health bleatings of Kansans who appear eager to put their high school drama training to use at places like Johnson County Commission meetings:

At the Johnson County Board of Commissioners meeting, someone from the public equated the enforcement of new COVID-19 protocols to Nazi Germany…

Imagine saying something like that to an actual survivor of the Holocaust. Or a group of people who have actually been oppressed. pic.twitter.com/Lti0XbauMQ

It isn’t enough to say thank you to teachers, who we’ve asked to do the near impossible.

“We are facing life and death options,” an elementary school teacher named Megan Epperson says in a video produced by the Kansas National Education Association.

To get a sense of what they’re up against, Epperson urged viewers to watch the movie “Apollo 13,” about how astronauts got themselves safely home after a ruptured oxygen tank aborted their mission.

“It’s never ideal to use duct tape to try to get a space shuttle home through space,” Epperson says.

“We say this over and over again, but things are becoming unsustainable,” Marcus Baltzell, a spokesman for the Kansas National Education Association, told the Reflector, echoing what state education commissioner Randy Watson told the Kansas Association of School Boards last month.

“I’ve been in about 45 school districts since the start of school, and I will tell you, what we’re doing is not sustainable,” Watson said. “Teachers can’t do it.”

It’s not enough to say thank you to the meatpackers who probably helped put that holiday meal on the table.

As of Monday, the Kansas Department of Health and Environment’s table of COVID clusters listed 24 deaths associated with meatpacking plants.

Back on Labor Day, I wrote about how the Wichita-based United Food and Commercial Workers Local 2, which represents mostly meatpackers, had lost 13 members to COVID. On Tuesday, I checked in with the union’s political director, Monica Vargas-Huertas.

“I have sad news indeed,” Vargas-Huertas told me. “Three more members have passed on — the last one this morning.”

On Monday, the Kansas Hospital Association, Kansas Chamber, Kansas Farm Bureau and the Kansas Medical Society launched their Stop the Spread effort to “ignite a sense of unity, community and responsibility.”

“We’ve got to convince, educate the Kansas populous that we’ve got to mask up. We’ve got to avoid crowds. We need to not go into bars after 10 o’clock,” Denning said.

“When you have people from western Kansas, who are now seeing their friends and their loved ones come down with it, when they hadn’t before, it becomes real. It becomes real to everybody,” Hawkins said.

How much misery (not to mention taxpayer dollars) could have been saved if Ryckman had just taken a moment to record a video message on his own phone back in July, after he spent a week in the hospital with COVID? Instead, he waited until after the August primary to let his Republican colleagues know, and his experience quickly devolved into politics.

It’s not enough to say thank you to health care professionals, teachers and other essential workers this week. We could also tell them we’re sorry. But unless we actually change our behavior, those two words will also be empty. 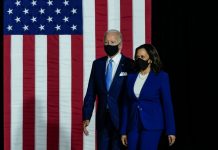