TOPEKA —  Michael O’Donnell resigned from the Sedgwick County Commission after voters turned on him in November and the district attorney made it known enough evidence existed to seek ouster of the Republican commissioner.

State Rep. Michael Capps’ career in the Kansas House was placed on life support in the August primary by his GOP constituents. Voters apparently decided by a 3-to-1 margin his involvement in a political conspiracy with O’Donnell and Wichita City Councilman James Clendenin to defame Brandon Whipple, who won the 2019 mayor’s race, was outrageous if not illegal. Capps has refused to quit. His term ends no later than Jan. 11 when his replacement, Republican Patrick Penn, is sworn into office.

So far, Clendenin remains on the Wichita City Council despite bipartisan calls for his voluntary exile. The walls are closing in at City Hall. District Attorney Marc Bennett last week filed a petition alleging Clendenin engaged in criminal and unethical conduct that made him unfit for office.

Despite pressure of an ouster petition, Clendenin may not go quietly. He claimed he was blind to the plan to develop an anti-Whipple video for social media. He asserted he helped raise money for standard billboards to denounce Whipple, not a dicey video commercial laden with falsehoods.

Clendenin told the district attorney he was clueless about scripting, directing, editing and distribution of the video ad. And, he said it was Capps’ idea to hide source of money for the attack on Whipple by funneling political contributions through an at-risk youth nonprofit controlled by Capps. The ad also was tied to a New Mexico shell company, Protect Wichita’s Girls, associated with Capps.

“I am proud of the many years of honorable service,” said Clendenin, who has held the job nearly 10 years and his current term would end in 2021. “I look forward to honorably completing my term in office.”

The district attorney’s ouster petition alleges Clendenin committed the misdemeanor offense of criminal false communication as well as moral turpitude. He alleged Clendenin conspired to frame a GOP party official for the Whipple assault. In addition, he was accused by the DA of aiding and abetting Capps in violation of state law by soliciting donations to a youth charity that financed the political smear operation. The bottom line, the prosecutor said, was Clendenin should forfeit his council seat.

Clendenin also has been censured by city council colleagues for his part in the plot to damage Whipple.

The clumsy political operation involving O’Donnell, Capps and Clendenin began unraveling in October 2019, while the offensive commercial was still airing, due to insightful reporting by The Wichita Eagle.

Haunted by own words

However, the final spike in the political career of these three Republicans will likely be hammered home by their own words.

The three were captured on a secret recording in November 2019 — famously made public last month — discussing details of their dirty-trick project to falsely accuse Whipple of sexual misconduct with women at the Capitol. The recording made covertly by producer of the anti-Whipple commercial included a lengthy conversation of a plan to blame the county’s GOP chairman for their work.

Clendenin can be heard on that recording predicting the trio’s bid to frame others and survive any scandal wouldn’t “go as smoothly as we’re talking about it right now.”

O’Donnell said: “I’ve always learned in politics it’s always avoid the truth at all expense. Right? And, just go on the attack.”

O’Donnell, a former member of the Kansas Senate, was indicted in 2018 by federal prosecutors on two-dozen counts of wire fraud and money laundering for violations of campaign finance law. He was acquitted last year on most counts and the jury hung on five others, but considered the encounter with federal authorities the worst experience of his life. Up to that point.

Capps, armed with practiced lines crafted with his fellow conspirators, went on a conservative Wichita radio talk show last year in an attempt to convince the public that county GOP chairman Dalton Glasscock was responsible for the sleezy ad.

That audio evidence could prove detrimental to Capps, but it was followed by release of a second secret recording that portrayed Capps as a cornered politician willing to take others down with him. This one was made by a Sedgwick County Republican official of Capps rejecting this plea for his resignation. On that tape, Capps threatened to retaliate by damaging GOP leaders and the party’s reputation.

Whipple, who received at least one death threat after the ad appeared on YouTube and Facebook during his campaign, said he would be patient with the ouster process.

“I believe our legal system is a path for justice and have confidence in DA Bennett and his office,” the mayor said.

Whipple has filed a slander lawsuit against Clendenin, Capps and O’Donnell. He had previously filed suit against video producer Matthew Colborn, but dropped him from the case after Colborn’s attorney released the explosive recording of the three elected officials’ conspiracy conversation.

Clendenin said he welcomed opportunity afforded by the ouster proceeding to thoroughly explain his involvement in the scandal. He said the public misunderstood his role.

“I anxiously look forward to being able to fully, completely discuss this matter and my involvement in it as it works through the legal process,” the council member said.

Curiously, Wichita resident Meredith Dowty began texting Clendenin in July with messages critical of Whipple. Clendenin didn’t initially notify law enforcement. In profanity-laced texts during September and October, according to Dowty’s charging affidavit, Dowty spoke in the texts of violence against the mayor and asked where Whipple lived. Clendenin eventually notified police when messages appeared to take a darker tone.

The Sedgwick County GOP asked Capps, Clendenin and O’Donnell to remove themselves from public office in wake of the audio evidence they engaged in “malicious and dishonest actions” to influence election of the Wichita mayor.

“There is no place in our community for this type of behavior,” the business and political organization said. “It is ugly and unacceptable.”

Capps allegedly paid $5,000 for the anti-Whipple ad through his Fourth and Long Foundation, a 501(c)(3) established in 2013 to help low-income youth. The false narrative anchoring the ad designed to diminish Whipple was drawn from a 2009 article in The Kansas City Star that raised questions about a Republican senator making inappropriate comments to  a female intern. That was long before Whipple, a Democrat, was elected in 2012 to the Kansas House.

Ben Sauceda, who served as executive director of the Sedgwick County Republican Party, accompanied Glasscock — who was to have been the conspirators’ fall guy — to ask Capps to resign from the Legislature.

Their November 2019 meeting took place at Glasscock’s house and Sauceda recorded the dialogue. It occurred before Capps was convincingly defeated in the August 2020 primary election.

Capps rejected their recommendation to quietly step down from the Kansas House. Instead, the recording shows, he threatened to destroy the county’s GOP operation. Glasscock said the Republican Party wouldn’t bow to threats. The party made known its desire for Capps to quit.

“I will not resign,” Capps said. “I will tell you now that the minute that you make a statement, I will drop my bombs. I’m just giving you fair warning because this is a nuclear bomb that’s going to drop that’s not going to be pretty.”

Capps, previously endorsed by Family Policy Alliance of Kansas and Kansans for Life, claimed Glasscock was targeting him because Capps was “loyal to the party, loyal to our values.”

Glasscock told the district attorney that the politicial controversy took on a new level of weirdness when someone approached him at a Republican meeting and demanded his cellphone. The person grabbed his phone, Glasscock said, and ran from the room. He told cops about it and improved security at his home.

O’Donnell, who was legally forbidden to remove himself from the Nov. 3 ballot, said he wouldn’t serve another term if re-elected. Voters settled the matter by narrowly electing Democrat Sarah Lopez. She had 17,041 votes to O’Donnell’s 16,777. On Nov. 13, the district attorney disclosed an investigation revealed evidence that would warrant filing an ouster petition against O’Donnell.

Instead of facing another legal proceeding, O’Donnell resigned before the scheduled Nov. 16 initiation of the DA’s plan to seek his removal from the 2nd District.

On Monday, Republicans in his district will meet in Haysville to select his temporary replacement. That person is to be sworn in immediately.

“It has been an honor and privilege to serve in the greatest community and work for the wonderful people of Sedgwick County these last four years,” O’Donnell said. “I am proud and humbled by how much we have accomplished, even in unprecedented times. I look forward to this next journey in my life.” 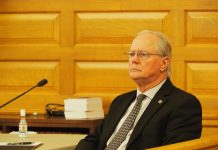 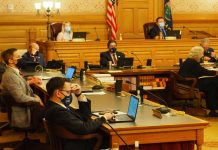