The Kansas Reflector welcomes opinion pieces from writers who share our goal of widening the conversation about how public policies affect the day-to-day lives of people throughout our state. Andrea Zuercher, of Lawrence, works as the chief copy editor for a health policy journal based in Washington, D.C.

Halloween isn’t even here yet when local stores shove autumn aside to make room for the lights, sounds, smells and sparkle of Christmas.

Normally I resist the lure of Christmas until a little closer to Dec. 25. I did not grow up in a liturgical church, but after quite a few years spent singing in Episcopal church choirs, I embrace the fact that Advent comes before Christmas and is worthy of observation on its own merits.

In those churches, Christmas trees did not appear until after midnight mass on Dec. 24, and we did not wish each other “Merry Christmas” until then, either. While the church I now attend is not liturgical, we follow the practices of Advent before giving way to the joy of Christmas when it’s time.

But these are not normal times, are they. Local news outlets and social media have already featured Christmastime activities, many of them virtual this year. A twilight walk around the neighborhood just after Thanksgiving revealed that people had spent their weekends putting up decorations and trees and lights. I’ve decided to trust my rambunctious cat and decorate a tree, and it’s going up sooner rather than later.

If pandemic times have shown us anything, it’s the value of celebrating now, because we just don’t know what might be around the corner. Too many Kansans will be marking the winter holidays without the presence of a loved one, either through death or because traveling to be together just isn’t worth the risk of spreading the virus. So many health care workers, in rural areas, towns, and cities, can’t go home because they want to keep their families safe as they work incessantly, risking their own lives to help others heal.

As the outward signs of Christmas emerge early, maybe some of the unseen indicators of Christmas should, too. Here are a few suggestions.

Kindness: Most of us grew up with the story of Santa Claus and his naughty and nice list. I was an obedient kid and tried my hardest to stay on the “nice” side of the ledger. As a grown-up, I see the value of treating people kindly even without a generously filled Christmas stocking as a reward. A favorite meme reminds me to “Be kind to one another, even if you don’t agree on stuff.” Goodness knows Kansans don’t agree on stuff. That doesn’t mean we can’t try to be kind.

Generosity: In other years the Salvation Army’s red kettles have appeared by now, heralded by bell ringers (and sometimes ukulele players). I have not yet seen or heard any this year. But the need is great in our communities, and there are many other ways to share your good fortune with others. Give online. Buy a cup of coffee for the man sitting at the edge of the Dillons parking lot holding a sign saying “Anything Helps. God Bless” in shaky writing. Donate to drives: food; warm clothing; supplies for the cats and dogs at the shelter. Help serve at LINK. And keep on, even after the calendar finally turns and leaves 2020 in the glow of the taillights.

Peace on earth: There might not be guns and tanks and bombs involved, but Kansans are at war with one another. Our ideologies clash, our values run up against those of others, and we dehumanize people who don’t think like we do. You might have heard the story of the Christmas truce of 1915, when soldiers from opposite trenches in World War I put aside their governments’ enmity for a few hours to share rations, music and a soccer match in no-man’s land, sparked by a German voice singing “Stille Nacht” (“Silent Night”). Can we practice a holiday truce in 2020? This does not mean we ignore the real damage inflicted by years of cuts to social programs; failed leadership in controlling a deadly pandemic; marginalization of racial, ethnic, gender and other minority groups; and other ways in which we have harmed each other. Some reckoning needs to happen before healing can begin. But if we don’t start, we will never get there.

It’s Christmas 2020. Santa Claus might be wearing a mask, with socially distanced elves staying six feet apart. There was no Old-Fashioned Christmas Parade through downtown Lawrence, with those beautiful horses, decked-out carriages, tiny ponies and elves texting on horseback, but downtown still sparkles with lights. We’ll attend Holiday Vespers and the Festival of Trees via video this year. Each night, more lights appear to push back the darkness. 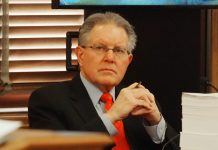 If we start seeing Kansas as dots of blue and red,...