TOPEKA — The Shawnee County prosecutor handling the retrial of Dana Chandler in a double murder case says a litany of evidence used to convict Chandler in 2012 doesn’t exist.

Deputy district attorney Charles Kitt provided testimony Monday in a disciplinary hearing for his predecessor and former colleague, Jacqie Spradling. She is accused of lying to juries in Shawnee and Jackson counties to secure convictions in high-profile cases.

The trial of Chandler for the 2002 murders of her ex-husband, Mike Sisco, and his fiancee, Karen Harkness, was featured by “48 Hours.” Cameras aren’t allowed in the hearing for Spradling, which is taking place mostly out of view in a pandemic-restricted space at the Kansas Office of the Disciplinary Administrator. News reporters are allowed to watch by video link but ordered not to make recordings or take images of this week’s hearing.

Spradling faces seven ethics violations for comments she made to the jury in the Chandler case and to investigators handling the complaint against her, which was filed by Alma attorney Keen Umbehr.

As outlined by deputy disciplinary administrator Matt Vogelsberg in his opening statement, Spradling fabricated a phone conversation between Chandler and Sisco, lied about Chandler violating a restraining order that never existed, claimed without evidence that Chandler drove from Topeka to Denver by way of Nebraska after the murders, falsely told jurors that Chandler read news articles about how to get away with murder, willfully violated a judge’s order not to point out a trial observer, caused the reversal of convictions, and made three false statements about evidence to investigators who asked her about the misconduct.

Under questioning by Vogelsberg, Kitt said his in-depth review of evidence in the Chandler case showed there was no way of knowing what Chandler and Sisco talked about on the phone, there was never a protection from abuse order, and there was no basis for the claim that she drove through Nebraska.

“We had no evidence in the file that she had ever been in Nebraska,” Kitt said.

The Kansas Supreme Court cited problems with Spradling’s conduct as its basis for overturning Chandler’s convictions in 2018. The Kansas Court of Appeals similarly overturned the conviction of Jacob Ewing on charges of rape and other sex crimes in Jackson County because of false statements made by Spradling about the evidence in that case.

Topeka attorney LJ Leatherman, who is representing Spradling in the hearing, pointed to the volume of evidence involved in the Chandler case. There were 1,000 documents and 100 witnesses, he said.

“She prepared to the best of her ability, what she believed was admitted at trial,” Leatherman said.

He said Shawnee County District Judge Nancy Parrish, who presided over the Chandler trial, will testify that she didn’t realize the evidence cited by Spradling in closing arguments had not been presented to the court.

Wendy Ewing, the mother of Jacob Ewing, said she believed Spradling knew exactly what she was doing when she repeatedly misled juries. 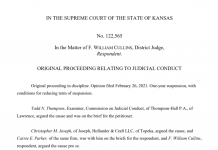 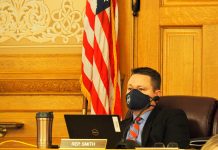