When news came that the CEO of our local hospital had contracted COVID-19, it wasn’t surprising.

Robert Wright, the chief executive officer of Newman Regional Health in Emporia, hadn’t been negligent in taking precautions against the virus. Instead, the news was consistent with the extraordinary risk that health care workers and those who support them take in battling an epidemic that has threatened to overwhelm our hospitals.

I don’t want to see anybody get the coronavirus, but I am especially alarmed when those in health care are infected. I don’t know Wright personally but I know we’re going to need him and every one of his staff, from the emergency room physicians to the janitors.

The surge in coronavirus cases following the Thanksgiving holiday was easily predicted, considering that so many Americans disregarded the advice of the Centers for Disease Control and Prevention and insisted on traveling to family gatherings, the public health be damned. Over the river and through the woods, but the river was the Styx and the woods were from Dante.

On Dec. 2, the Kansas Department of Health and Environment released the worst numbers for the epidemic so far. Over a two-day period, 119 new deaths were reported, bringing the total to 1,679. Some of those deaths were from batches of previous statistics from county health departments, but the numbers also reflected a hike in new deaths and hospitalizations.

Since then, the death count has continued to rise; it was 1,786 on Dec. 4 and broke 2,000 on Friday, when the state recorded a new two-day record of 131 deaths. That’s more Kansans than died in Korea, Vietnam, Iraq and Afghanistan combined.

Nationally, we hit a record seven-day average for new cases on Dec. 5, according to the COVID Tracking Project. A million new cases were added for the first five days in December, and there were more than 100,000 COVID-19 patients in hospitals across the country.

A few days earlier, the head of the CDC, Robert Redfield, warned this winter would be “the most difficult time in the public health history of this nation.”

Last week, COVID-19 became the No. 1 cause of death in the United States. Think about that for a moment. More people died in the first week of December from the coronavirus than from heart disease, cancer or automobile accidents. In fact, we lead the world in coronavirus fatalities. Daily deaths surpassed 3,000 on Wednesday, Dec. 9. That’s more Americans than were killed at Pearl Harbor or on 9/11.

With hospitals across the state of Kansas approaching 85% ICU bed capacity, on average, you might reasonably assume that just about everyone in the state would be on board with the message to wear masks, stay home and be willing to get vaccinated just as soon as one becomes available.

Sadly, you would be mistaken.

A conspiracy of ignorance is hard at work to make Kansans believe that our officials are lying to them. The ignorance is spread by nutjobs on social media, spouted by some local officials who ought to be required to wear tinfoil hats, and slickly delivered by well-paid political hacks to the ears of our lawmakers.

Those taking part in the propagation of ignorance include Kansans for Health Freedom, an anti-vaxxing 501(c)4 nonprofit that is spreading dangerous and unnecessary doubt about the safety of a forthcoming COVID-19 vaccine, and local officials like Riley County Commission Chairman Marvin Rodriguez, who last month compared mask mandates to the totalitarianism of Nazi Germany.

But the most active player to compete for hearts and minds in the Sunflower state is the Kansas Policy Institute, a free market “think tank” that has been busy throwing flaming brickbats at Gov. Laura Kelly and KDHE secretary Lee Norman.

The KPI’s chief thrower of said brickbats is Dave Trabert, the organization’s president. The way he sows doubt is to cherry pick data out of context, use a poorly designed chart as proof of intent to deceive, and generally attack the credibility of any experts who conclude that mask mandates work. Trabert has said that it isn’t the efficacy of masks he’s questioning, just government mask mandates. Because, you know, freedom.

According to Trabert: Norman was wrong back in August when he presented data about the effectiveness of mask mandates among counties that had adopted them, the media was wrong last month when it reported a CDC study had concluded Kansas mask mandates work, and the KDHE is wrong about the coronavirus rate because its tests are just too sensitive.

But here’s the thing: None of Trabert’s criticism is substantive. Nothing he has said — and he says quite a lot, while lobbying the Legislature, writing opinion and urging county commissions to reject mask mandates — changes the vast body of research that masks and mask mandates do, in fact, work.

Trabert is not a medical expert. He is a paid free market activist, and he will take whatever side of an argument that advances the cause of radical Ayn Rand-ism capitalism.

Rand died in 1982, but her ideas continue to poison. Her philosophy of “Objectivism” urges individuals to act in unfettered self-interest and to reject as “evil” conventional notions like charity and altruism. If you have a couple of weeks to spare, read Rand’s 1957 political-manifesto-as-novel “Atlas Shrugged” to figure out KPI’s inspiration. Spoiler: In the novel, rich business people (read “job creators”) go on strike to protest burdensome government regulation and the “looters” who would restrict their productivity and profits.

KPI’s founder, George Pearson, former director of public relations for Koch Industries, is also a former board member of the Atlas Network, an umbrella for hundreds of libertarian and free-market organizations. 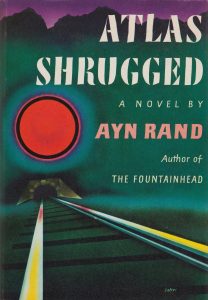 Trabert, the KPI president, is well-paid for his free-market evangelism. Because the Kansas Policy Institute (formerly the Flint Hills Center for Public Policy) is a 501(c)3 nonprofit, it can engage in advocacy and lobbying, but it also must make its 990 tax returns public. According to the organization’s 2018 return, the most recent on file with Guidestar, Trabert’s salary was $170,437.

There’s a whole lot of people in Kansas who don’t have the Dave Traberts of the world speaking for them. While there has been an excess amount of gas expended by the Legislature’s Republican majority about “personal responsibility,” there’s been damned little talk of social responsibility. Simply put, this concept is high school civics in action: that we have a responsibility to other individuals for the common good of the communities in which we live.

Does the idea of government telling you to wear a mask make you angry?

Our local governments put those stops signs there for a reason. If you ignore the stop sign you’re not only risking your own safety, but the safety of anybody else who might be approaching the intersection — a family member in another car, perhaps, or a stranger’s child on a bicycle or an elderly person in the crosswalk.

Knowing that we could be ticketed for speeding or blowing a stop sign might be irksome, or even induce anger, but a bit of rational thought will result in the conclusion that it’s right and proper for the government to put those signs in place. Just imagine a situation in which the stop signs at the four-way intersection weren’t a command but a suggestion. A good many individuals might recognize the wisdom in stopping, but a good many might not — and the result would be the bloody stuff of high school driver’s education films.

The same is true of masks.

Do they work? Of course. In a health emergency, should the government adopt temporary mandates to make sure everyone is protected? The answer is yes, just as it is for stop signs at intersections. The primary role of government is to protect its citizens, not the free market pirates who ply our prairies.

As COVID-19 cases continue to surge, we’re at an intersection for which there are no traffic signs while the GOP continues to tout “personal responsibility.”

Beyond the dead and dying, the people who deserve our sympathy and our support the most are those who will be relied upon to clean up after the crash. Soon, there may not be enough staffed ICU beds for all the Kansans who need care.

But those of us who don’t work in health care are unlikely to know the cost that will be paid — not only in lives lost, but in the unimaginable toll the pandemic will continue to exact on our physicians and nurses and all the rest. We are at war with the virus, and yet there are Kansans who continue to argue that the statistics are inflated, that mask mandates are a step toward fascism, that doctors are just listing cause of death as COVID for the money.

Max McCoy is an award-winning author and journalist. A native Kansan, he started his career at the Pittsburg Morning Sun and was soon writing for national magazines. His investigative stories on unsolved murders, serial killers and hate groups earned him first-place awards from the Associated Press Managing Editors and other organizations. McCoy has also written more than 20 books, the most recent of which is "Elevations: A Personal Exploration of the Arkansas River," named a Kansas Notable Book by the state library. "Elevations" also won the National Outdoor Book Award, in the history/biography category. Max teaches journalism at Emporia State University.

Wichita's domestic abuse epidemic inspires call for… by Tim Carpenter October 21, 2021
‘We have the watch’: Stories from inside NORAD on 9/11 by Emma Athena September 11, 2021
Emporia nursing student who refused COVID-19 vaccine allowed… by Margaret Mellott April 15, 2022