TOPEKA — Solo protester Edward Myers was the only sign of life Wednesday among diehard fans of Donald Trump outside the fortress-like Kansas Capitol.

It was a level of personal dedication matched by Joe Biden supporter Graham Bonsall.

These ideological rivals expected a bigger turnout at the epicenter of political power in Kansas. Both assumed the statehouse would be a magnet for people eager to let their feelings known about a chaotic presidential election that denied the twice-impeached Republican incumbent a second term and prompted President Biden’s ascendancy to the White House along with Vice President Kamala Harris.

“I was thinking I’d come out here and there’d be a bunch of people,” said Myers, a 70-year-old retiree from Newton. “I’m the only guy here. Where is everybody? Fine with me. I don’t care. I just enjoyed my constitutional rights.”

He planted along the sidewalk some of his top-shelf yard signs from a collection of 50 crafted to put a spin on the Biden and Trump showdown as well as a couple affiliated targets. Here’s a sample of his yard art: “MAGA will rise again to stop the socialist tyranny,” “Sleepy Joe is a useful idiot of the left to promote socialism,” “Warning!! Seeing Nancy Pelosi on TV could cause erectile dysfunction,” “Democrats: The party of hate,” “Dems are afraid of Trump. That he will run again in 2024 and win” and “Dems are for open borders that maintain a permanent underclass that vote for Democrats.”

There was a smattering of motorists who responded to his hand-held sign by honking to affirm they weren’t convinced socialism was the answer to challenges in the United States.

Elsewhere on the Capitol grounds, Bonsall took up position near the Abraham Lincoln statue with a six-foot-tall poster that interpreted the Biden victory and Trump’s defeat. He spelled out B-I-D-E-N with the words benediction, indivisible, democratic, enduring and nation. He contrasted that with a depiction of T-R-U-M-P with the words through, Russian, undermining (subtext “fired”), malediction and prevails.

His personal objective was to offer counterargument to any sign-holder depicting the popular vote or Electoral College triumph of Biden as illegitimate. Given the turnout, it could be labeled his Myers Rejoinder.

He suspected more folks would be at the Capitol, but understood many would want to celebrate while watching the inauguration ceremony at the U.S. Capitol in Washington, D.C.

“I feel like it’s a great day, in the sense that it’s finally come,” he said. “You know, we made it through all the transition period regardless of the people who tried to deny the truth of the election.”

Myers said the nation’s election system ran aground in ways that was used by champions of Biden to take out Trump.

“He is an illegitimate president elected through fraud and deceit. You can underline that,” he said. “Because of all the things that were shown to be illegal. What the Dems did illegally in at least six states, and they just buried it. Put it under the rug. They said that they weren’t going to challenge it. They wouldn’t even listen to us. So, it’s illegitimate.”

He also said decisions by Facebook, Twitter and other social media organizations to exclude Trump’s commentary wouldn’t stifle his voice in Kansas.

“I don’t believe in censorship like Twitter and Facebook and all those other censors. They don’t believe in the First Amendment. They’re a bunch of autocrats and they want to keep their socialism and dominate everybody’s freedom,” Myers said.

While Democrats control the White House and possess partisan leverage in the U.S. House and U.S. Senate, Myers said his faith in the Republican-dominated Kansas Legislature was unshaken. He’s certain the GOP will be able to deal with Democratic Gov. Laura Kelly in a way not realistic against Biden.

“I think that we got a pretty good Legislature,” he said. “More Republicans and Dems, and it looks fairly conservative. I’m thinking they can block the governor on most things.”

He said Beltway Democrats would devote themselves to lining the federal government with socialists dedicated to establishment of “welfare programs.”

In Washington, U.S. Sen. Jerry Moran, a Kansas Republican, attended the inauguration of Biden and Harris. He referred to the event as an important milestone in the nation’s democracy.

“The inauguration represents the orderly and peaceful transfer of power that is an enduring symbol of a government of the people, by the people and for the people,” Moran said. “I look forward to working with my Senate colleagues in this new year to create a better future for all Kansans.”

Apparently the Jan. 6 riot at the U.S. Capitol inspired by Trump and others was on the mind of Moran and his congressional collegues from Kansas. Four of the state’s delegation members — U.S. Sen. Roger Marshall, U.S. Rep. Ron Estes, U.S. Rep. Jake LaTurner and U.S. Rep. Tracey Mann — voted the day of the Capitol invasion to proceed with challenges to voting in Arizona.

“We have the opportunity right now to turn the page on the past four years and begin a new chapter of American history — one where we put community first, where facts and science matter, where we focus on what unites us instead of divides us,” Davids said. “I’m rooting for President Joe Biden and Vice President Kamala Harris’ success, and I look forward to working with them and their new administration to fight this virus and ‘Build Back Better’ than before.” 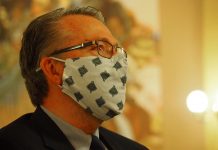 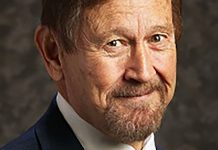 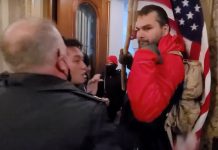