How ‘whiteness won the war’ in Kansas

Signs such as this one were common in Kansas and throughout the Midwest and Northeast during a time of “sundown towns” following the Civil War. (Tubman African American Museum in Macon, Georgia)

The Kansas Reflector welcomes opinion pieces from writers who share our goal of widening the conversation about how public policies affect the day-to-day lives of people throughout our state. Margy Stewart is a board member of Prairie Heritage Inc., a nonprofit dedicated to preserving the prairie and sharing its stories.

All too often we define racism as a personal failing, an irrational hatred harbored in the heart. This definition is certainly true on occasion but it is too limited: It misses the social force of white supremacy as it has shaped the Kansas we have inherited.

Many of us from virtually all-white rural areas and small towns maintain that racism has nothing to do with us because “there are no Blacks” where we live.

Yet as historian James Loewen writes, “In the normal course of human events, most and perhaps all towns would not be all-white.”

So how did large parts of Kansas become so “white”?

Both books have won the Jan Garton Prairie Heritage Book Award, a $1000 prize awarded for books that illuminate in new ways the heritage of the prairie states. When read together, they shed light on the workings of white supremacy. 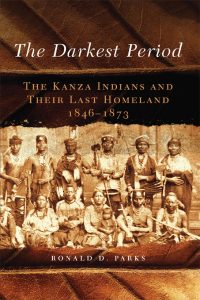 Evoking the day-to-day life of individual Kanzas, “The Darkest Period” describes how the Kanza people were pushed out of the state that bears their name. On their diminished reserve near Council Grove, they were subjected to a barrage of crimes committed by Euro-Americans, including lynching, theft, grave desecration, vandalism and encroachment by non-native squatters. Parks shows how the Indians’ legal rights were overridden by whites, driven by belief in “Manifest Destiny” — the idea that God had foreordained the expansion of Euro-American society across the continent.

When I asked what surprised him most during his research, Parks told me that it was the virulence of white supremacy.

“Of the various phenomena that gave rise to Manifest Destiny … by far the most pervasive and determinant was the deeply felt sense of superiority and entitlement of white Anglo-Saxon Protestants,” he said.

This white entitlement unleashed violence against African Americans as well.

In “This Is Not Dixie: Racist Violence in Kansas, 1861-1927,” Campney documents numerous lynchings, physical assaults, arson and mob attacks on Black people’s businesses and homes. These Euro-American crime waves, Campney writes, shared “one defining characteristic: the tacit or the overt support of the larger white community.” 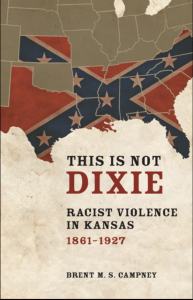 Campney quotes historian Kristen Tegtmeier Oertel, who argued that “the northern faction may have ‘won’ the battle in … Kansas, but ultimately, whiteness won the war.”

The triumph of “whiteness” meant a shaky identity for Euro-Americans, constantly threatened by the full reality of people of color. It meant a false sense of superiority and therefore a craving for reassurance, all too often culminating in theatrical displays of domination, often marked by horrendous acts of violence.

Thus, many Kansas communities publicly declared themselves “sundown towns” — places where Blacks were threatened with violence if they stayed past sunset. Other towns were “whitened” after the fact, through actual violence.

Campney cites a litany of newspaper reports and editorials:

“A riot was organized in Doniphan … for the purposes of driving the colored people out of town.”

“El Dorado had a touch of high life last night. About 200 men participated in the riot and all negroes were forcibly ejected from town.”

“(The Black visitor) had exactly 15 minutes in which to leave (Pomona), or … the rope was put in suggestive evidence.”

“The killing of the negro (in Neodesha) … is already beginning to bear fruit. Most of the negroes have left town.”

“(The mobbing of Black people in Liberal) brought results. The negroes have gone, and as far as we are concerned we are glad of it.”

These public mobilizations against Black people reinforced white people’s sense of their own preeminence but also deprived them of an independent, reality-based identity. “Whiteness” depended on domination.

If only this racist tradition were confined to the past!

Unfortunately, we saw it emerge again in the theatrical anti-election protests endorsed by powerful Euro-Americans, including U.S. Sen. Roger Marshall and U.S. Reps. Ron Estes, Tracey Mann and Jake LaTurner, who tried to cast doubt on an election that featured a highly mobilized Black electorate and the election of a Black vice president.

Their objections were so blatantly focused on Black precincts that Stuart Stevens, senior strategist for Mitt Romney’s presidential campaign, called their Congressional coalition the “Jim Crow caucus.” Theirs is yet another dramatic performance of white entitlement, designed to garner support from “whites” who still define themselves in opposition to people of color.

But Campney’s book also documents a counter-tradition in Kansas stretching back to before the Civil War — a tradition of creative and courageous actions taken by Black people and others to create a more perfect union, to the benefit of all.

The majority of citizens of all ethnicities now favor this second tradition. Marshall et al. may well find their performances drowned out by boos.

How ‘whiteness won the war’ in Kansas

Margy Stewart and her husband, Ron Young, are the caretakers of Bird Runner Wildlife Refuge, a native prairie preserve in the Flint Hills of eastern Geary County, Kansas. They are working to conserve upland prairie and restore former crop fields to bottomland tallgrass prairie. They serve on the board of Prairie Heritage, Inc., a nonprofit that is establishing a Geary County African American History Trail. Together with Prairie Heritage, Inc., they partner with Junction City Juneteenth to make nature experiences available to people of all ages. The website is prairieheritage.org.