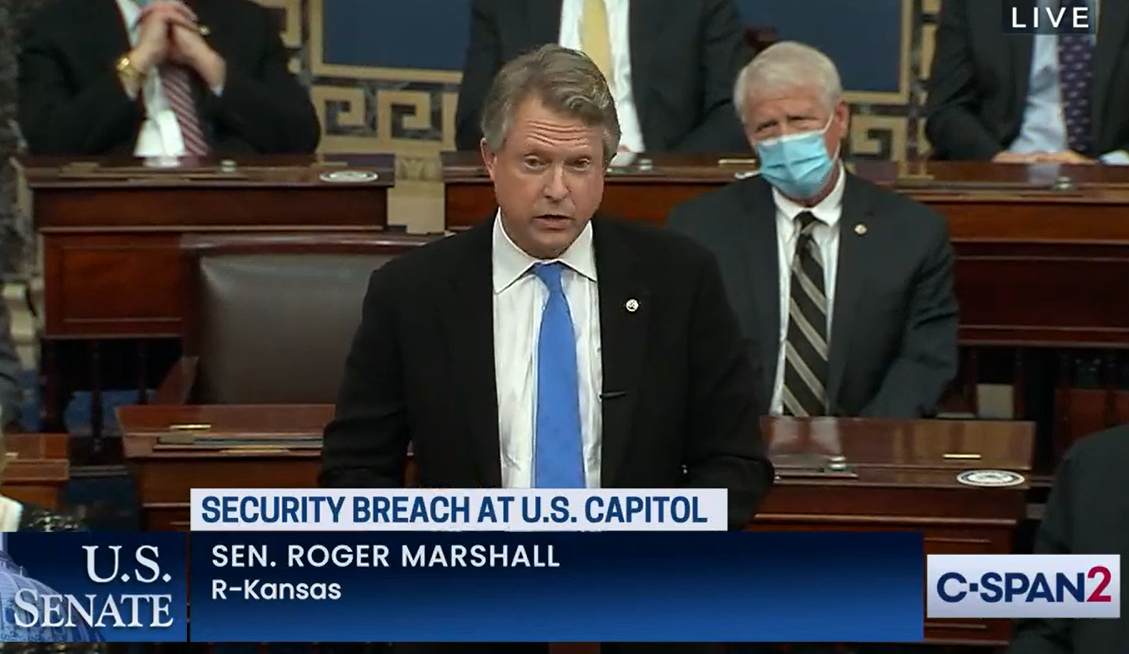 Classes weren’t in session on Jan. 6, but insurrection day was fresh on students’ minds when they came back to Wichita State University just a couple of weeks ago.

“I think it will remain a teachable moment for the foreseeable future,” Robert Weems said of Jan. 6.

Dramatic weather might have consumed Kansans’ attention since Saturday, but I’m unwilling to let this week end without putting some of Weems’ wisdom into the record about what happened in Washington six days ago.

While some white Americans might have been shocked that jurors voted to acquit despite overwhelming evidence of guilt, Black Americans have been experiencing that sort of “justice” for more than a century.

Weems said there were “some very real parallels” between the Senate trial and Jim Crow-era trials.

“The conclusion was pretty much pre-ordained from the get-go,” he said, noting most Republican Senators had signaled their intentions not to convict the former president before the trial even started.

“Especially when we look at the relatively few cases in the South where whites were charged with committing some type of crime against an African American, most often a lynching, in these trials it was pretty much a foregone conclusion what the outcome was going to be,” Weems said.

He pointed to perhaps the most infamous Jim Crow-era trial, in which J.W. Milam and Roy Bryant were acquitted for the 1955 murder of 14-year-old Emmett Till after Till whistled at Bryant’s wife, Carolyn, at the Bryant family’s general store in Mississippi.

“In that trial, all the evidence was pretty clear in terms that Milam and Bryant had actually committed the crime,” Weems said, “but the defense attorney, in his final summation, he turned to the jury and said something to the effect of: ‘I know that every last Anglo Saxon one of you will have the courage to free these individuals.’ Ultimately that happened.”

The next year, Milam and Bryant told Look Magazine how they’d murdered Till.

Besides that unusually wide-out-in-the-open example of American injustice, there’s a part of the story that’s not often discussed, Weems said.

“The general store where Emmett Till allegedly whistled at Carolyn Bryant was one of many stores that the Bryant family owned in the Mississippi Delta, and their primary constituents were African Americans,” he said. “After the trial, Black people in the South conducted a boycott of Bryant stores, and a couple years later they were at the brink of bankruptcy.”

That’s where he sees another parallel to the former president.

“There are so many auxiliary legal issues he’s facing, the Trump name, the Trump brand, is going to be a disgrace,” he said. “We already see the economic fallout, with a lot of corporations and banks that have backed away from their relationships with Donald Trump.”

When it comes to Kansas’ two main players in the Trump trial, it’s tempting to hold out hope rational voters will boycott Sen. Roger Marshall in 2026 and he’ll end up as a sedition caucus asterisk. But then there’s the mealy mouthed Sen. Jerry Moran, who condemned the Jan. 6 insurrection while voting to acquit.

He cited a Wichita Eagle editorial condemning Marshall (along with Congressmen Ron Estes, Tracey Mann and Jake LaTurner) and demanding a stop to his “dangerous allegiance to President Trump and those among his supporters who are seditious.”

“But looking at someone like Moran, who appears to have taken his oath seriously to uphold the Constitution and uphold the governmental structure of United States,” Weems said, “I have a feeling that Moran will be viewed much more favorably.”

He encouraged the long view.

“What happened in terms of Trump’s acquittal is not the end of the story; it’s an early chapter in an ongoing epic,” Weems said.

Still, he said, the country’s in “a dangerous moment.” This week brought a new poll showing strong Republican support for the former president.

“If we throw out American democracy in favor of a cult of personality,” he said, “history is very clear that does not end well.”

Fortunately for our possible future, even relatively apolitical students have begun to pay attention, Weems said.

“Because,” he said, “when you have a group of people taking over the national Capitol, talking about assassinating the sitting vice president of the United States because he didn’t sign off on something that was clearly unconstitutional — it was so much stuff that’s totally beyond the pale that even a casual observer of American politics had to pay attention.”

Friends, take a moment to re-read how Weems just described what we all witnessed. And let’s not forget.

A Kansas psychology professor has logical explanations for some Republicans’ delusions

Kansans have spent 22 years restoring Constitution Hall to remind us...