“Something of this magnitude occurring really did wonders for reducing some of the stigma for reaching out for help, normalizing the experience of being off,” Gregory Nawalanic of KU Health Systems’ Strawberry Hill Campus says of people seeking mental health help during the pandemic. (C.J. Janovy/Kansas Reflector)

Time for a check-up, Kansas.

Recently we got some good news about mental health during the pandemic: Deaths by suicide declined in the United States by almost 6% last year.

Kansas also saw a decline. The Kansas Department of Health and Environment sent over a table with provisional data showing four fewer Kansans dying by suicide in 2020 compared to 2019: 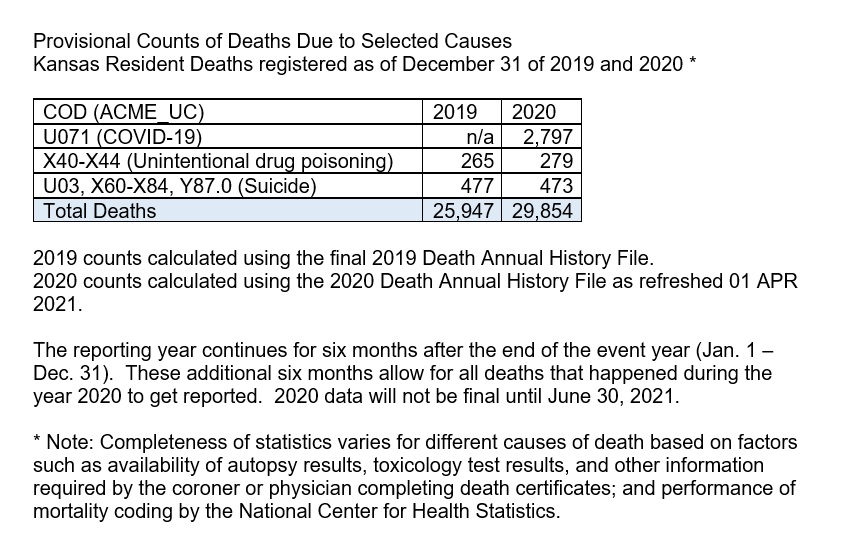 These are happy outcomes for actual people who are still alive, as well as for those of us who’ve watched amateur psychiatrists in the Kansas Legislature and elsewhere claim that public health measures like lockdowns and online school were making people suicidal.

Still, 2,797 people died of COVID-19, a category we didn’t even have the previous year. And I don’t know anyone who’s feeling great in the head right now. So why have some folks managed to stay with us during one of the most depressing years in memory?

“I believe the basic answer to the question is that the drop in suicides is for the same reason we have seen this before during periods of national crisis — war, the Great Depression, etc.,” William Gabrielli, chairman of the psychiatry department at the University of Kansas Medical Center, told me in an email.

It’s the “we’re all in this together” phenomenon.

“It is during less stressful times that people suffering from depression don’t see lots of others also distressed and therefore dwell more on their own feelings,” Gabrielli explained. “They don’t have the defense that ‘everyone is going through the same thing.’ ”

His colleague, Gregory Nawalanic, the clinical director at KU Med’s Strawberry Hill inpatient psychiatric campus, echoed that point, remembering all the messages of support we saw from celebrities and others at the beginning of the pandemic.

Also crucial was that everyone was suddenly paying attention to mental health in general.

“We did our best to communicate that if you’re not OK, don’t try to take this on yourself — reach out for support,” Nawalanic said.

Early in the pandemic, Nawalanic said, he was worried because they had to reduce the number of beds in their clinic to create social distance. Also, they worried people were hesitant to go to emergency rooms for acute mental help because they feared being exposed to COVID-19.

“We started seeing people coming in at higher and higher level of acuity, because they had not been effectively managing their mental health symptoms and were far sicker than they might have been,” he said.

By maintaining “a lot of plasticity” in their responses, Nawalanic said, mental health providers have been able to manage change as they’ve learned more throughout the pandemic.

Expanded use of telehealth, for example, meant he could see more patients and it was easier for patients to make appointments: they didn’t have to take time off work, drive and negotiate whatever else might have turned a 60-minute therapy session into, he said, “a two-hour production.”

“I haven’t seen any significant decline in the quality of care,” he said. “No patients are saying, ‘This isn’t working.’ ”

As with everything, though, context is crucial.

“Society is focused on mental health in a way I’ve not seen in my 23 years in Kansas. From that perspective it’s beautiful,” said Chad Anderson, chief clinical officer at KVC Health Systems, which serves children and families.

Anderson applauds community efforts such as such as the teen-led Zero Reasons Why, whose efforts might have contributed to a 33% decline in teen suicide in Johnson County last year.

The American Rescue Plan’s investment in prevention will help, he said.

“It’s brilliant: Why don’t we spend dollars upstream instead of waiting until someone’s in a real crisis before we assist,” he said.

And people are definitely still in crisis.

In late February and early March, the number of patients at KVC’s two acute psychiatric hospitals in Wichita and Kansas City, Kansas, “were as high as they’ve been since we opened those hospitals,” Anderson said.

“Whether that is people reaching back out for health care because Covid case numbers are improving and vaccines are rolling out, or a backlog because these kids have been holding on for as long as they could, I don’t know,” he said. “But we need to be cautiously aware that there’s lots of kids in acute hospitalization right now and they’re there for a reason.”

Even as we stagger toward hopefully better days, experts warn of a pandemic-related worldwide increase in “pathological grief.” So, let’s not forget what we’ve learned.

“We still run up against the American mindset that we should all just be fine, no one should be upset, and pathologizing anxiety and sadness,” said KU’s Nawalanic, “when in reality those are very normal experiences.”