TOPEKA — Kansas is expected to receive nearly $5 billion in federal funds to assist state and local government, those in need of housing and education institutions weather the ongoing effects of COVID-19.

The American Rescue Plan Act signed into law by President Joe Biden in March provides $1.9 trillion in federal assistance for recovery from the pandemic. Current estimates indicate the measure allocates about $4.9 billion to Kansas, not including aid directly to individuals.

The aid earmarks $1.6 billion for state government, $989 million for county and city governments and $1.2 billion for education, with the remainder going to other needs. While initial funding expectations are now known, regulation or guidance on how some of these funds can be used is lacking, said Murl Riedel, a fiscal analyst with the Kansas Legislative Research Department. For example, money to be allocated toward a state capital projects fund does not clearly outline what sorts of efforts could receive the money.

“It does say the U.S. Treasury is tasked with establishing an application process within 60 days of ARPA enactment, allowing states to request these funds,” Riedel said. “That hard deadline of 60 days from enactment would be May 11. Hopefully, we will have some idea of how these funds can be used.”

The American Rescue Plan is the sixth in a series of federal pandemic relief packages, now totaling $5.2 trillion. Unlike previous COVID-19 relief funds, ARPA monies can be used to replace lost revenue but not for any tax cuts enacted after March 3, 2021.

Money headed to local governments is divided into $564 million for counties, $251.6 million to the nine largest cities — including Wichita, Topeka, Overland Park and Lawrence — and $172.4 million to other cities. Social services, $412.3 million, housing assistance, $250.2, and health care, $209.7 million, are among other areas to receive significant funding from the act.

However, nearly a quarter of the funding will be headed toward education in Kansas. K-12 schools will receive $830.6 million to address specific pandemic needs. These include professional development on infectious diseases, purchasing cleaning equipment or planning for potential closures.

As legislators on the Senate Ways and Means Committee listened to a briefing on the funds on Thursday, some expressed concerns about implementing the programs.

“It’s going to take an incredible amount of administration at the state level, it sounds like, to figure this out,” said Sen. Tom Hawk, D-Manhattan, after a discussion on funds that have yet to be allocated for maternal, infant and early childhood home visiting.

While there are still some uncertainties, Riedel was quick to assure legislators many programs matched up well with CARES Act initiatives. He said this should streamline the overall process.

The American Rescue Plan also offers a 5% increase in federal matching money for those states that have implemented Medicaid expansion. A provision in the Affordable Care Act requires the federal government to cover 90% of a state’s costs of increased coverage post-expansion.

Kansas is one of 12 states yet to implement Medicaid expansion measures. Proponents have argued expanding KanCare would serve an additional 120,00 to 160,000 people statewide and could save employers over $80 million.

The Senate panel also listened to updated revenue estimates for Kansas provided by J.G. Scott, director of the Legislative Research Department. He reported state general funds are projected to increase from $6.9 billion in 2020 to $8 billion in 2021, before lowering to $7.5 billion in 2022.

This marks an increase of almost $320 million in the November estimate for 2021, Scott said. 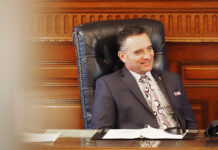 Four big questions about the feds’ scrutiny of oil and gas...