OSKALOOSA — Gov. Laura Kelly celebrated her first mask-free event in more than a year Monday by stepping into a shed on the Perry family’s cow-calf farm to urge Kansans to consume more beef and to touch on highlights of the annual legislative session.

The Democratic governor said the Republican-controlled Legislature appropriately expanded funding of K-12 public education and made progress on ending the nasty habit of stripping highway funding from the Kansas Department of Transportation to fill holes in the state budget.

On the downside, she said, the Legislature again blocked expansion of Medicaid health services to more than 120,000 Kansans. Her proposal for legalizing medical marijuana didn’t survive the gauntlet, the Legislature limited her authority to distribute federal COVID-19 aid and her veto of a contentious tax-reform bill was overridden by the House and Senate.

“As we look back at everything that was accomplished — yeah, there were some disappointments — but we got the third year in a row of fully funding public schools. I think that’s just incredible,” Kelly said. “We didn’t get Medicaid expanded, yet. Will continue working on that.”

Kelly, who is running for re-election 2022, said some legislation sent to her desk and the decision to override a portion of her vetoes had to be viewed in the context of partisan politics. She said it was continuation of an attempt by Republicans to define her work as governor on behalf of the state.

“What I hope is that they don’t push through really bad legislation, bad policy just for political reasons. I don’t think it does them any good and it certainly doesn’t do the state any good,” the governor said.

In terms of COVID-19, she said the state was shifting vaccination strategy in an effort to move the population closer to herd immunity. There will be less emphasis on mass vaccination sites and more focus on placing vaccine in clinics, doctor offices and pharmacies for more personalized application, she said.

“We’re taking the vaccine to where the people are. We’re also working with community groups, particularly a lot of churches, working in partnership with them,” the governor said.

Before stepping into the interview about the legislative session, Kelly signed a proclamation declaring May to be Kansas Beef Month. She did so in an open-sided barn on the farm owned by Phil and Rhonda Perry, who have been involved in the cattle industry for more than 40 years on land owned by the family for six generations.

“I want to thank you for having this event essentially outdoors. So, for the first time in well over a year I haven’t had to wear a mask. This feels absolutely fantastic,” she said.

She said Kansas was known internationally for producing high quality beef and the industry remained critical to the state’s economic success. Kansas ranked third in the nation with 6.5 million cattle on ranches and in feed yards. She said beef and beef product exports from the state totaled nearly $1.5 billion in 2020, placing the state first in the United States.

“The beef industry contributes more than $14 billion directly to the state’s economy and is the largest single sector in the industry,” Kelly said. “My administration will do all we can to support you and ag workers across the state to ensure that together we carry on the legacy of agricultural excellence for generations to come.”

Phil Perry, who is president-elect of the Kansas Livestock Association, said the family owned a herd of about 400 mostly Angus cows. Their calves are born in the spring and generally sold after weaning to operators of feed yards.

“The business is okay,” he said. “Our segment of the beef market is okay.”

Mike Beam, secretary of the Kansas Department of Agriculture, said the state’s livestock industry thrived due to abundant grassland forage and grain crops, access to good water and the dedication of 27,000 ranchers and farmers across Kansas.

“These operations are over 90%, according to the data, owned and operated by families. That’s something that has always inspired me,” he said.

Beam said the export market had picked up and profitability of the fed-cattle market was stronger than in the past several years. Kansas cow-calf operators are optimistic about the future, he said.

He said the pandemic had an unsettling influence on the beef industry with suspension of sales to hotels and restaurants, but the governor remained focused on “the numbers, the science and the facts — not on politics. I know that’s all agriculture has always wanted people to do is make policy decisions on the facts and science.”

Tracy Thomas, vice president of marketing for U.S. Premium Beef in Kansas City, Missouri, said demand for beef was at a 30-year high.

Consumers hungry for quality beef raised expectations during the past quarter century and producers responded by doubling the percentage of beef grading at choice or better to 80%, he said.

“That gave producers a clear target to shoot at,” Thomas said. “We’re very bullish on beef, pardon the pun.” 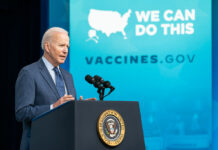 Kelly looks at bright side of legislative session, and that’s no bull