Tucker Graff tells lawmakers at a redistricting town hall in Manhattan that he disagrees with a GOP senator’s assertion that the meetings represent “unprecedented transparency” in the process. (Sherman Smith/Kansas Reflector)

MANHATTAN — Kansas residents unloaded frustrations with the GOP-led redistricting process on Monday as lawmakers launched a 14-stop, five-day blitz of town halls to gather public input into how political boundaries should be redrawn.

Republicans characterized the online streaming of public forums as “unprecedented transparency,” brushing aside complaints about the short advance notice of meetings and a compacted schedule with gathering times mostly during working hours. The meetings also preempt the release of detailed information from the U.S. Census Bureau that serves as a basis for drawing congressional and legislative districts.

At the first stop, held at the Kansas State University student union in Manhattan, residents repeatedly asked a panel of Senate and House members to hold additional meetings later this year after census data can be reviewed. They also asked lawmakers to keep the new district maps as similar as possible to current ones.

The majority party invited criticism of the redistricting process by announcing the meeting times after 6 p.m. on Friday, July 30, and by not consulting with Democrats on the schedule. Democrats fear the GOP will rely on its supermajority power in the Legislature to gerrymander districts and override Gov. Laura Kelly’s veto power.

Tucker Graff, a 33-year-old Manhattan resident, said he could attend the first town hall only because he is a nontraditional student who just finished an internship and hasn’t yet started his new job.

“I struggled to understand how we can recommend fair maps or what we think you should do before the census data is even released,” Graff said. “I don’t know why you’re having these meetings.”

He said he understands Kansas is a Republican state.

“The impulse is going to be, because we have a supermajority in the state Legislature, that we can just kind of ignore Governor’s Kelly’s veto and just push whatever maps we want,” Graff said. “But I hope we do make an effort to try to stay as bipartisan as we can to come up with maps that make everybody happy through the process.” 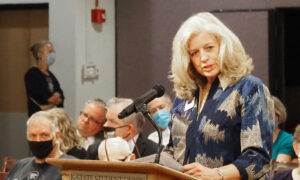 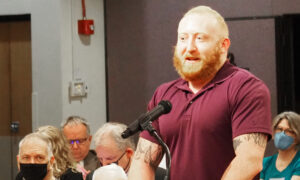 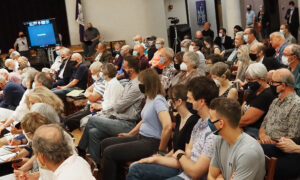 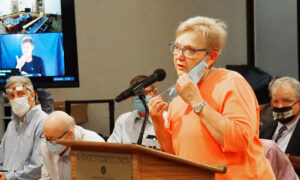 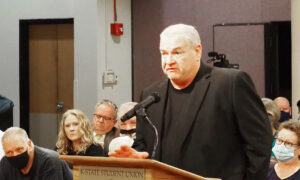 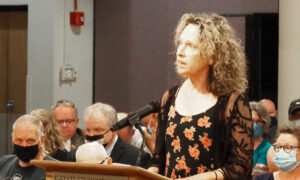 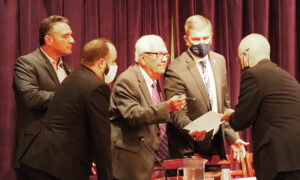 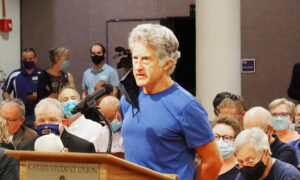 Sen. Rick Wilborn, a Republican from McPherson who serves as chairman for the redistricting panel, said in an interview after the meeting that complaints about transparency are “a false narrative.” Video of the meetings has never before been available online, he said, and there is no deadline for residents to provide written statements to the committee.

Wilborn said it was too early in the process to decide whether to hold additional meetings after the census data is available. The U.S. Census Bureau plans to provide a first look at the data on Thursday, and provide a more detailed database in September.

During the last redistricting process a decade ago, lawmakers spread the 14 meetings out over a four-month period. Wilborn said the one-week lineup this time was set for the convenience of lawmakers, and was preferable to “spreading it out and ruining two weeks.”

“This is a citizen Legislature,” Wilborn said. “Bear in mind a lot of us have careers and activities and vacations.”

Residents who can’t make it to a particular meeting can drive to another one or watch them online, Wilborn said.

During the public forum, Marsha Tannehill objected to Wilborn’s assertion that lawmakers were interested in transparency and bristled at the decision to schedule the meeting for 9 a.m. on a Monday.

“This is the most inconvenient time for people to be here,” Tannehill said. “It is not open and transparent, as you have just stated. If it was, there would be more meetings, and there would be many more opportunities for other citizens to be here. I think this was very inconvenient, and I think it was done, perhaps, purposefully.”

Martha Mather described herself as an average citizen and voter who doesn’t have detailed knowledge of how the redistricting will be done. But, she said, she is an American who is committed to doing the right thing for her neighbors.

Linda Uthoff, of the League of Women Voters of Manhattan and Riley County, asked lawmakers to develop guidelines and criteria for forming districts that results in fair maps. She asked them to end the practice of including party affiliation and incumbent addresses in the database used for redistricting.

Jim Swim, of Marysville, urged lawmakers to reunite Marshall County residents who currently are divided by congressional districts and Kansas Senate districts. People there don’t know who to call when issues within the community require attention at the state or federal level, Swim said.

“Dividing counties and municipalities should be avoided because this dilutes the voice and representation of these communities,” Swim said.

Judson Jones, a Pottawatomie County resident, complained that the meeting began without the Pledge of Allegiance. He said he doesn’t care where the lines are drawn. All the talk about nonpartisanship is wrong, he said.

“The winning party gets the opportunity to pick who and how they get represented,” Jones said. “Don’t consider a nonpartisan activity is going to be fair. It’s not going to be fair because the nonpartisanship gets put away when people walk out the door. Everybody knows that.”

John Nachtman, GOP chairman for Dickinson County, attended a public forum on redistricting for the first time just to see what goes on at one of these meetings. He dismissed concerns about the town hall schedule.

“Everybody ought to have a chance to go to one meeting,” Nachtman said. “Everybody can take time off. If they stretched it out too long, they’d be complaining it’s too slow.”

Kansas welcomed a pawn shop for the rich in exchange for a… by Sherman Smith April 24, 2022
LGBTQ community, people of color in the crosshairs of banned… by Ariana Figueroa April 18, 2022
As Wichita embraces efforts to reduce homelessness, profound… by Lily O'Shea Becker August 14, 2022