I’ve written about 100 amazing things to see and do in Kansas. How many have you managed?

The Kansas Reflector welcomes opinion pieces from writers who share our goal of widening the conversation about how public policies affect the day-to-day lives of people throughout our state. Roxie Yonkey has written the forthcoming book “100 Things to Do in Kansas Before You Die.” She will talk about it at appearances across the state this fall. 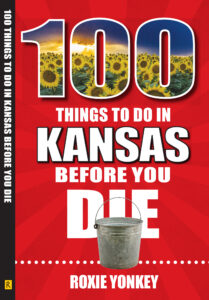 When I told people that I was writing the book “100 Things to Do in Kansas Before You Die,” reactions varied. Some asked how I would narrow the field to 100. Some wondered how I could find 100 bucket list things to do in the Sunflower State. Because Kansas is fascinating, narrowing the field proved far more difficult than finding enough to list.

How did I choose 100 things? By picking places that are distinctly Kansas, like Oz. Here are some examples.

“The Wizard of Oz” premiered in 1939. As the movie opened, Dorothy Gale was living in sepia-toned Kansas, a dreary land. When the tornado whisked her to the technicolor Land of Oz, Dorothy longed to return to Kansas, saying “There’s no place like home.” Dorothy knew what she was talking about. Follow Dorothy to the Emerald City of Kansas, Wamego, No. 62.

The Oz movie makers missed the picture that “Home on the Range” painted in 1871: “Where seldom is heard a discouraging word, and the skies are not cloudy all day.” I hope you’ll see the “Home on the Range” perspective. You can celebrate our famous state song at the cabin where Brewster Higley wrote it. The restored cabin north of Athol is No. 26. If you’re brave, sing the song while you’re there.

Kansas’s state motto, Ad Astra per Aspera, is one of my favorite things about the state. Adversity always returns, but Kansans have persisted and prevailed. To celebrate Ad Astra, drink Free State Brewing Company’s Ad Astra Ale at Ad Astra Food and Drink in Strong City. It’s No. 1.

Dwight Eisenhower (No. 63) and Amelia Earhart (No. 64) are supposed to represent Kansas in the U.S. Capitol’s Statuary Hall. Eisenhower is already there, but Earhart’s sculpture is locked in a bureaucratic neverland. You have numerous ways to honor them in their hometowns, Abilene and Atchison. The person Earhart will replace in Washington, John J. Ingalls, devised the Ad Astra motto.

Other famous Kansans join Eisenhower and Earhart at No. 87, the Legends Outlets in Kansas City’s Village West. Also in Village West, cheer for No. 45, Sporting Kansas City of Major League Soccer, and NASCAR at Kansas Speedway, No. 48.

Ingalls is little remembered, but his cousin Laura Ingalls Wilder is still famous. No. 36, the Little House on the Prairie, still stands near Independence. Charles Ingalls’ well is still there, along with a log cabin, schoolhouse, and post office.

Elk Falls celebrates a different sort of little house. Take the Elk Falls Outhouse Tour, No. 39, on the Friday and Saturday before Thanksgiving. The winning outhouse receives a chamber pot trophy.

Elk Falls bills itself as the World’s Largest Living Ghost Town, but another town still hangs on despite tornados’ brutal attempts to kill it. On May 20, 1916, 1917, and 1918, tornadoes struck No. 67, Codell, a small town in Rooks County. The third tornado was the worst, and the town has never recovered. Codell installed a twister monument on May 20, 2018, the centennial of the final May 20 tornado.

In the same year the first Codell twister dropped from the sky, Clyde Cessna started building planes in Kansas. Cessna was the first in a long line of air pioneers to choose Wichita. The city became the Air Capital of the World. Meet the pioneers of Kansas aviation at the Kansas Aviation Museum, No. 66.

Look beyond the atmosphere at No. 65, The Cosmosphere in Hutchinson, home of the world’s largest Space Race collection. Also in Hutchinson, explore 600 feet below ground at No. 70, Strataca, the Kansas Underground Salt Museum. Southeast Kansas was once a mining hotbed. Visit Big Brutus, the world’s largest electric shovel, in West Mineral. No. 69 chewed so much land that the state created the Mined Land Wildlife Area from Brutus’s bites.

I hope my readers will enjoy experiencing the 100 things in my book, which will arrive Oct. 1. Plus, you can seek the several hundred bonus places that I also listed. Ad Astra per Aspera.

I’ve written about 100 amazing things to see and do in Kansas. How many have you managed?

Local author Roxie Yonkey has lived in and written about Kansas for more than 30 years and has traveled extensively throughout the state. Roxie is the Chief Exploration Officer of RoxieontheRoad. As the blog’s name implies, she loves road tripping on roads less traveled. Sometimes she travels solo and sometimes with her husband, Eric. Whether solo or together, they find fun and adventure wherever they travel.