The honor guard carries the casket of Bob Dole to the hearse on Dec. 11, 2021, at St. Mary Queen of Angels Catholic Church in Russell, Kansas. (Joey Bahr for Kansas Reflector)

TOPEKA — Even as lights were turned off and doors were locked, Bob Dole stayed past closing at the Kansas State Fair in Hutchinson just to talk with his fellow Kansans.

He did this in 2014 at age 90, on his tour to each of the 105 counties in the state. This did not go unnoticed by Audrey Coleman, who spent the day with him, watching as he connected with Kansans from across the state.

“He never tired,” Coleman, now director of the Dole Institute of Politics at the University of Kansas, said during a service for the political icon Saturday at the Statehouse. “He was there until they turned out the lights and shut the door. He loved visiting with Kansans.” 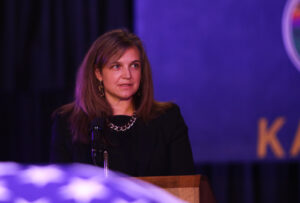 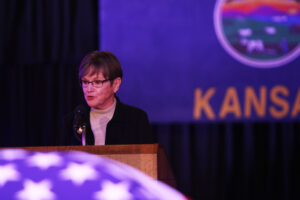 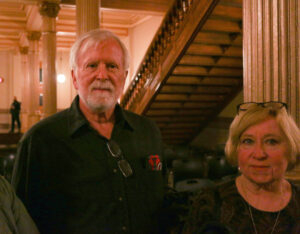 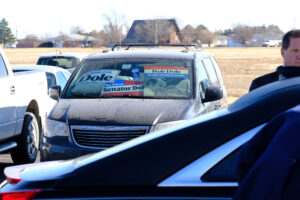 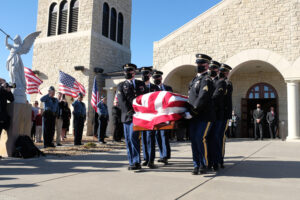 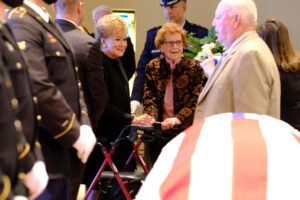 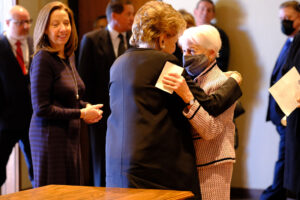 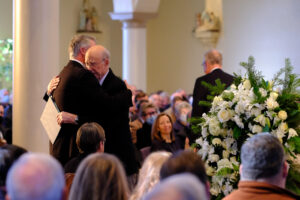 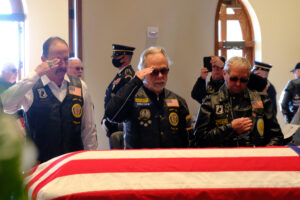 Opinion by Ron Smith: Remembering Kansas’ own Bob Dole: Will we see his like again?

Opinion by Leroy Towns: Two reasons Kansas’ beloved Bob Dole could not get elected as a Republican today

Opinion by Audrey Coleman: What Kansans were saying to Bob Dole in the 1960s sounds familiar

On Saturday, Dole made his final trip to Kansas for services in Topeka and his hometown of Russell. He will be laid to rest in the Arlington National Cemetery in Arlington, Virginia. He died Dec. 5 at age 98.

Jim Peters, who was in the audience at the Topeka service, said Dole was always willing to help out and meet with the students. He recalled a trip to Washington, D.C., with about 90 students.

“One of the students was a Docking … and the Dockings and the Doles were opponents,” Peters said. “The Docking girl who was with our students stooped behind a post while the picture was taken, and her leg was sticking out — like she was anticipating kicking Dole out. It was a lot of fun.”

Coleman said Dole’s legacy will endure through students at the Dole Institute.

“We will grow the bodies of civil discourse in bipartisanship from the next generations of leadership and encourage it in our leaders today,” Coleman said.

During her speech at the Topeka service, former U.S. Senator Nancy Kassebaum Baker  recalled a fond memory with Dole.

After the service, Peters said he enjoyed hearing Kassebaum speak about Dole.

“She was very personal, very precise,” Peters said. “I liked it. It touched your heart (and) was just what you wanted to hear more about Bob Dole. She loved him. We loved him.”

Gov. Laura Kelly spoke at both services, and said he was more than just his major accomplishments.

“While it would be easy to recount the awards, honors and accolades Bob Dole accumulated during his life’s journey, his legacy is not best measured in medals and titles,” Kelly said, “but rather by the lives he enriched and in the countless ways he worked to create a better America.”

For the next generation, Coleman said, Dole’s legacy will permeate the lessons taught to them about connecting with others.

“Senator Dole’s legacy for the next generation really is one of empathy and tolerance and compassion and listening to people who have a different perspective than you,” Coleman said. “In order to make compromises and in order to move our country forward, we need to empathize with another person. Understand you don’t have to agree, but you do have to understand their position and figure out where you can find common ground.”

Margaret Mellott is a recent Emporia State University graduate of communication and journalism. During their time at ESU, they spent all four years on the campus paper, The Bulletin. She also spent one year with The Campus Ledger at Johnson County Community College. Outside of collegiate journalism, Mellott has also worked on projects for Vintage KC Magazine and Humanities Kansas.

'Statesman,' 'hero,' 'favorite son': Well wishes pour out… by Allison Kite December 5, 2021
Kansas Guard veteran worn down from years battling… by Tim Carpenter June 29, 2021
Kansas welcomed a pawn shop for the rich in exchange for a… by Sherman Smith April 24, 2022