TOPEKA — As a Johnson County commissioner in 2020, Mike Brown welcomed the “nice surprise” of Mark Zuckerberg’s cash to support the expansion of advance voting.

Now, as an election denier seeking the GOP nomination for secretary of state, Brown opposes the use of grants funded by the Facebook magnate and promises to ban ballot drop boxes on his first day in office. His campaign launched a far-right attack on Republican Secretary of State Scott Schwab, who is seeking reelection as the state’s top election official.

Brown has used Zuckerberg’s social media platform to falsely claim that Schwab accepted grants from the Center for Tech and Civic Life, a Chicago-based nonprofit financed by a $350 million gift from Zuckerberg. In reality, Schwab allowed local officials to decide whether to apply for private grants during the pandemic-ravaged election cycle.

In an Oct. 8, 2020, county commission meeting, Brown made the motion to accept an $856,245 grant from CTCL after hearing a presentation from election commissioner Connie Schmidt on how the money could be used to help process a massive number of advanced ballots, expand early voting locations, provide hazard pay, and train new staff.

Zuckerberg’s donation to CTCL became a flashpoint for concern about the potential for private money to influence elections — and an inspiration for bogus conspiracy theories. A state audit ordered by the Legislature concluded there were no obligations attached to the $2.3 million worth of grants allocated to 25 Kansas counties. The money was used for election equipment, including facemasks and sanitizer, as well as staffing and real estate.

The state Legislature, bolstered by Republican voters’ belief in President Donald Trump’s lies about election results, banned the use of private grants as part of an election reform package in 2021.

Brown jumped on the Big Lie bandwagon, falsely claiming the results in Kansas were tarnished by fraud and directing outrage toward Schwab, who has said repeatedly that Kansas elections are safe and secure. 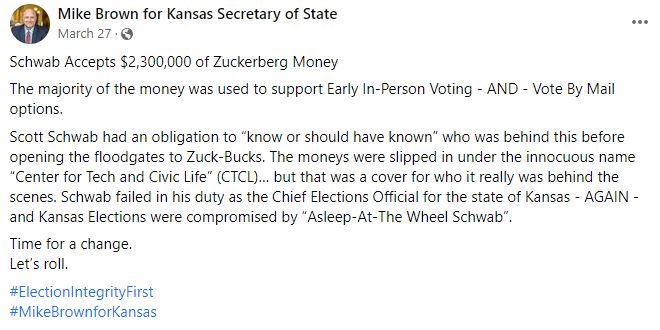 “The majority of the money was used to support Early In-Person Voting – AND – Vote By Mail options,” Brown said. “Scott Schwab had an obligation to ‘know or should have known’ who was behind this before opening the floodgates to Zuck-Bucks. The moneys were slipped in under the innocuous name ‘Center for Tech and Civic Life’ (CTCL)… but that was a cover for who it really was behind the scenes. Schwab failed in his duty as the Chief Elections Official for the state of Kansas – AGAIN – and Kansas Elections were compromised by ‘Asleep-At-The Wheel Schwab’.”

Brown didn’t respond to a phone call and email from Kansas Reflector seeking comment on the funding he previously supported.

Schwab’s campaign, in a statement issued for this story, said the decision to apply for and accept “Zuckerbucks” was left to each county.

“Brown said Kansas elections were compromised by the acceptance of Zuckerbucks, yet he led the charge to accept more than $850,000 in Zuckerberg money for Johnson County elections, even calling the grant a ‘nice gift’ and a ‘big help,’ ” the Schwab campaign statement said. “As a Johnson County Commissioner, Brown should have known from whom he was accepting money.

“Brown says one thing but does another. When someone shows you who they really are, believe them. Brown has demonstrated a lack of integrity by accepting private money for election administration and hypocritically passing the buck.”

The Kansas Legislative Division of Post Audit report on the use of CTCL grants included a written response from one election official, Crawford County Clerk Donald Pyle.

Pyle said most local election officials in Kansas were already familiar with the nonprofit, which had provided useful tips for how to construct easy-to-understand ballots and engage the public to increase voter turnout. The Legislature’s decision to ban the use of private grants for election operations is “especially upsetting,” Pyle wrote, because the grants saved taxpayer dollars.

“This distrust of local government officials has been very apparent over the past several years,” Pyle said. “I hope the Legislature realizes soon that we can be trusted to act in the best interests of our citizens.”

In the Oct. 8, 2020, Johnson County Commission meeting, Schmidt said her elections office could not have anticipated the cost of managing the 2020 election.

“We have operated in a world of unknown at the election office,” Schmidt said. “With things changing on on a daily basis, we’ve turned into more of a mail operation. Our voters normally vote in person, which is a fairly simple transaction. Voting everybody by mail I’ve always described as people, paper, postage and processes. And we are heavy into that area.”

She said her office was about to mail 140,000 advanced ballots. Brown responded by making the motion to accept the CTCL grant “to be used for the purpose of continued planning and operationalizing safe and secure election administration in Johnson County, Kansas, in 2020.”

Johnson County Commissioner Becky Fast said in an interview for this story that there were no apparent partisan ties to the grant money.

“We got to stipulate how the funds were allocated, and I was really excited for hazard pay,” Fast said. “I mean, we have 176 in-person polling locations, and to be able, during very difficult times, to recruit staff, to give an additional $25 to each election worker, and make our polling locations more accessible for persons with disabilities and voters at risk of COVID — that was, to me, much-needed funds for counties.”

Fast said Brown voted along with other commissioners to certify the results of the 2020 election, and that he was always complimentary of the election office.

“I never heard him express any concerns about how our elections were being handled when he was on the commission,” Fast said.

Brown lost his reelection bid for the county seat in the 2020 election.

On Monday, he will participate in an Election Integrity Forum in Olathe, sponsored by a dark money political action committee, to discuss “irregularities in Kansas voting procedures.” Admission is $25.

Former Fox Nation and CBS News personality Lara Logan — who has promoted through her Truth Social account a conspiracy theory attributing the Jan. 6, 2021, attack on the U.S. Capitol to a Ukrainian military operation — will moderate the event. The lineup features prominent election deniers, including Colorado secretary of state candidate Tina Peters and Arizona secretary of state candidate Mark Finchem, who will join by remote. Kansas state Sens. Mark Steffen, of Hutchinson, and Mike Thompson, of Shawnee, are scheduled panelists.

Sherman Smith is the 2021 and 2022 Kansas Press Association’s journalist of the year. He has written award-winning news stories about the instability of the Kansas foster care system, misconduct by government officials, sexual abuse, technology, education, and the Legislature. He previously spent 16 years at the Topeka Capital-Journal. A lifelong Kansan, he graduated from Emporia State University in 2004 as a Shepherd Scholar with a degree in English.