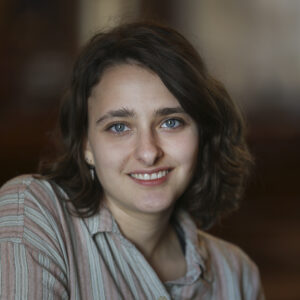 A graduate of Louisiana State University, Rachel Mipro has covered state government in Baton Rouge and New Orleans. She and her fellow team of journalists were 2022 Goldsmith Prize Semi-Finalists for their work featuring the rise of the KKK in northern Louisiana, following racially-motivated shootings in 1960. With her move to the Midwest, Rachel is now turning her focus toward issues within Kansas public policies.

TOPEKA — Kansas voting rights advocates say legislation passed over the past two years hurts disabled voters and voters of color in Kansas, diminishing their ability to cast ballots in the November election. Ami Hyten, executive director of the Topeka Independent Living Resource Center, said she was concerned about the effect of 2021 legislation on […]

TOPEKA — Around nine years ago, Lenexa resident Juanita Ramos slipped off a log while on a hike, and when she woke up the next day, the only thing she could move were her eyes. While she was paralyzed for three months, Ramos used raw cannabis in juice form to get by. Ramos said she […]

TOPEKA — In late August, Rep. Heather Meyer was taking her son to school when she noticed something weird on her car’s windshield. When she tried to wipe it off, the Overland Park Democrat realized it was a pack of 40 printouts, including pictures of dismembered fetuses, accusations that she was a baby murderer and […]

TOPEKA — Chris Mann, Democratic attorney general candidate, said he would work to end the use of dark money in elections if elected, saying many Kansan elections were clouded by funding from unknown sources. Dark money refers to money where the donor or source of the funding is unknown, and is used to influence political […]

TOPEKA — Parents in the Auburn-Washburn school district south of Topeka say they have been unfairly served debt collection letters after confusion over billing during the COVID-19 pandemic.  During the 2021-2022 school year, schools operated with a different financial assistance process. Normally, students qualify for financial assistance through the free and reduced lunch program. With […]

TOPEKA — Republican attorney general candidate Kris Kobach unveiled a three-part plan Thursday to work with southern law enforcement agencies to reduce the flow of fentanyl into Kansas, increase penalties for fentanyl distributors and prevent retail crime in Kansas. At the news conference, held outside the Attorney General’s Office in Topeka, Kobach said he would […]

LAWRENCE — Women gathered at the Watkins Natural History Museum on Thursday in Lawrence to discuss the November election, holding repurposed “Vote No” signs from the August abortion campaign and wearing “pro-Roe” bling. The news conference was one of four held by Keep Kansas Free across the state on Thursday. The organization’s stated goal is […]

TOPEKA — The American Civil Liberties Union of Kansas has launched a political action committee, aiming to combat what it describes as misinformation ahead of the November election. Kansans United for Civil Liberties, which is supported by the ACLU but formed as a separate entity, is focused on issues of reproductive freedom and voting rights. […]

TOPEKA — A Kansas senator said the Kansas Department for Children and Families lied in a foster family report, preventing the family from adopting a child who had lived with them for her entire life. At a Tuesday news conference at the Statehouse held by several members of a foster care oversight committee, lawmakers accused […]

TOPEKA — Republican candidates were a no-show at a Topeka forum meant to help voters elect House members, disappointing event organizers and enraging Democratic Rep. Vic Miller. At the Oct. 4 forum, hosted by the League of Women Voters of Topeka-Shawnee County and other organizations, all 11 House candidates were invited. The five Republicans and […]

TOPEKA —  Dozens of Kansas attorneys announced their support of attorney general candidate Chris Mann Thursday, saying they wanted a competent person in the office.  The group, which launched under the name “Kansas Attorneys for Mann,” is made up of more than 140 Republican, Democratic and Independent attorneys across the state. “The group’s main focus […]